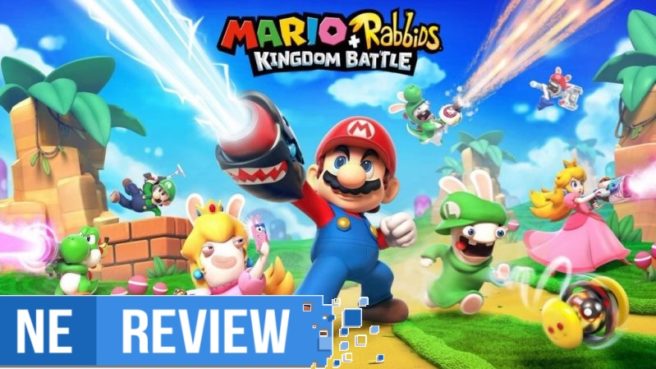 I don’t think I’ve ever seen a bigger turnabout regarding the reception of a game than I have with Mario + Rabbids Kingdom Battle. When the first major leak regarding Ubisoft’s newest Nintendo crossover game happened, the general reaction was one of confusion and general displeasure. That was the case up until Ubisoft’s E3 2017 press conference in June, where Mario + Rabbids was finally unveiled in full with the help of Mario creator Shigeru Miyamoto himself. That, compounded with a truly heartwarming moment from the game’s creative director Davide Soliani and the overall presentation of the game, quickly garnered new feelings of excitement and hope that Mario + Rabbids was something to look forward to. So, after months of anticipation, is Mario + Rabbids Kingdom Battle able to keep that feeling of hope and excitement alive, or does it leave us wishing the Rabbids would have just stayed home?

Mario + Rabbids’ story begins with a young inventor and her robotic assistant Beep-O in their Super Mario-themed basement tampering with her newest invention: a device called the SupaMerge that allows any two objects to be fused together. After encountering an overheating error, however, she decides take a break and try again later. Right on cue, the Rabbids warp into the now empty basement with their Washing Time Machine and begin wreaking havoc with the malfunctioning SupaMerge. After merging several Super Mario related items with other Rabbids, the SupaMerge malfunctions, fuses itself to one of the Rabbids, and hits the Washing Time Machine. This causes the Rabbids and all the objects in the young inventor’s basement to be sucked into the Time Machine and transported to the Mushroom Kingdom. While unveiling a new statue in front of Peach’s Castle, the heroes of the Mushroom Kingdom and its denizens are sucked into the vortex, fragmenting the Mushroom Kingdom and merging it with the Rabbids and various real-world objects from the young inventor’s basement. Now, our heroes from the Mushroom Kingdom must team up with Beep-O and their Rabbid counterparts to find the Rabbid fused with the SupaMerge to try and return their world to normal.

Surprisingly, the story starts off pretty dense, but as the game begins to move forward, it gets much less congested and starts to flow a lot more freely. The premise is wacky enough to live up to the Rabbids’ standards, while also giving some interesting context to why these unrelated worlds have somehow come in contact with each other. 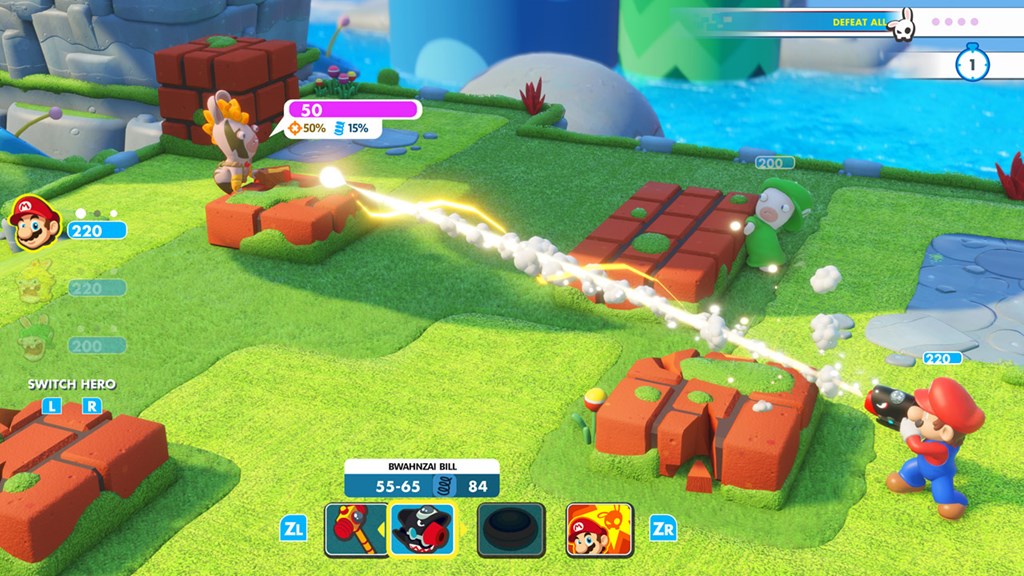 Mario + Rabbids Kingdom Battle’s gameplay is an interesting deviation from both its Mario and Rabbids roots, being a tactical-strategy game. The early levels do a good enough job of teaching the player the basics of how combat will work. Combat plays out in a series of turns and actions, with each hero planning out and executing their turn, followed by the enemies’ turn. Each turn, heroes and enemies are able to perform up to three main actions: movement, combat, and ability activation. These elements are introduced at a nice pace, with early battles focusing on utilizing those actions. Once the basics of battle are introduced, your movement options are expanded, allowing each hero to perform two extra movement options, called a dash and a hero jump. These elements add even more to the battle system, allowing the three heroes in battle to perform combos to rack up extra damage and expand their movement range. There are also cover mechanics and warp pipes, that cut the chance of heroes being hit by enemy attacks and expand movement further, respectively.

Another element that adds to the combat system are the heroes that participate in battle. In total, there are eight playable characters who can participate in battle, with three being selected to form a team. Mario, Luigi, Yoshi, and Princess Peach all serve as playable characters along with their Rabbid counterparts. Each hero has a different assortment of weapons, statistics, and abilities that set them apart from each other. For example, Rabbid Luigi acts as a defensive unit with high movement who specializes in inflicting status ailments upon the enemy, while Rabbid Mario acts as a shotgun wielding tank, who can take and deal heavy damage to enemies. Each character also comes with a skill tree that unlocks specific abilities to be used in battle. The skill tree focuses on four areas: movement, attack, technique, and other. While some areas share perks across different heroes, like the ability to perform additional dash attacks or extend their movement range, there are plenty of perks specific to each hero; and planning out which skills to invest in is an important part of building characters to take advantage of their roles.

The final component to outfitting characters comes in the form of weapon selection. Each of the eight heroes have a primary and secondary weapon that have specific attributes attached to them. Mario’s primary weapon is the standard blaster, while his secondary weapon is a hammer used for close-range combat. Luigi’s primary weapon is a sniper, while his secondary is an automated sentry that seeks out and detonates upon contact with an enemy. Most weapons also come with status affects that trigger upon critical hits. Status effects like honey, which halt movement altogether, or push, which knocks enemies across the map and possibly out of bounds. All of these things are important to keep in mind when forming a team to take on certain battles. 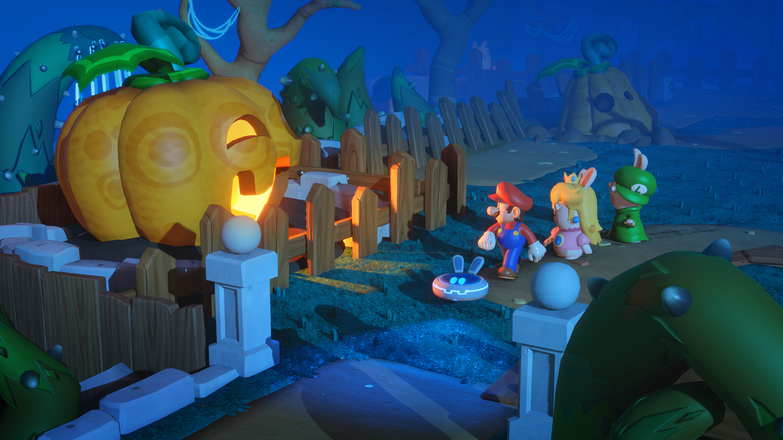 This is where the main problem with Mario + Rabbids combat begins to pop up. With so many things to keep in mind before and during the course of a battle, all of the different options slowly but surely begin to feel overwhelming, especially after World 1. At first, battles feel fairly simple in what they require of the player in terms of strategy development and planning; but rather quickly these skills, movement options, and combos begin to feel almost like a necessity for success. While this can add challenge when striving for a perfect ranking after each battle, those who approach the game casually or with no prior experience to the strategy genre may find Mario + Rabbids a bit more challenging than they were expecting. Luckily, for those who feel the challenge is a bit too much, there is the option to switch on an Easy Mode at the beginning of each battle, giving the team 50% more health and restoring it to full before the battle begins.

Aside from combat, there are also puzzle elements introduced while traveling across each world. During stretches between battle zones, there are some required and optional puzzle solving. The optional puzzles serve to unlock elements like additional weapons, music, concept art, or skill tree points. These puzzles come in a handful of different forms like block pushing, manipulating colored switches, and moving statues onto pedestals. These puzzles can act as an interesting distraction, but more often than not feel like a way to earn collectibles of slow down the pace between battles.

Mario + Rabbids also has a lot of additional features that add a lot more content to the game, both alone and with a friend. First, the game features plenty of collectibles, whether it be concept art, 3D figures, or music. There are also up to ten challenges that unlock upon completion of a World, allowing for players to receive extra skill points and cash upon completion. After finishing World 1, a lot of things open up in the game’s hub world, including a museum to view collectibles, a hub to play co-op with a friend, and an option to replay any level from a World in order to achieve a perfect rank if you missed it on your first round. These additions are fantastic, as they allow for a ton of replayability and also allow for extra rewards for those who invest the extra time to see everything a World has to offer. 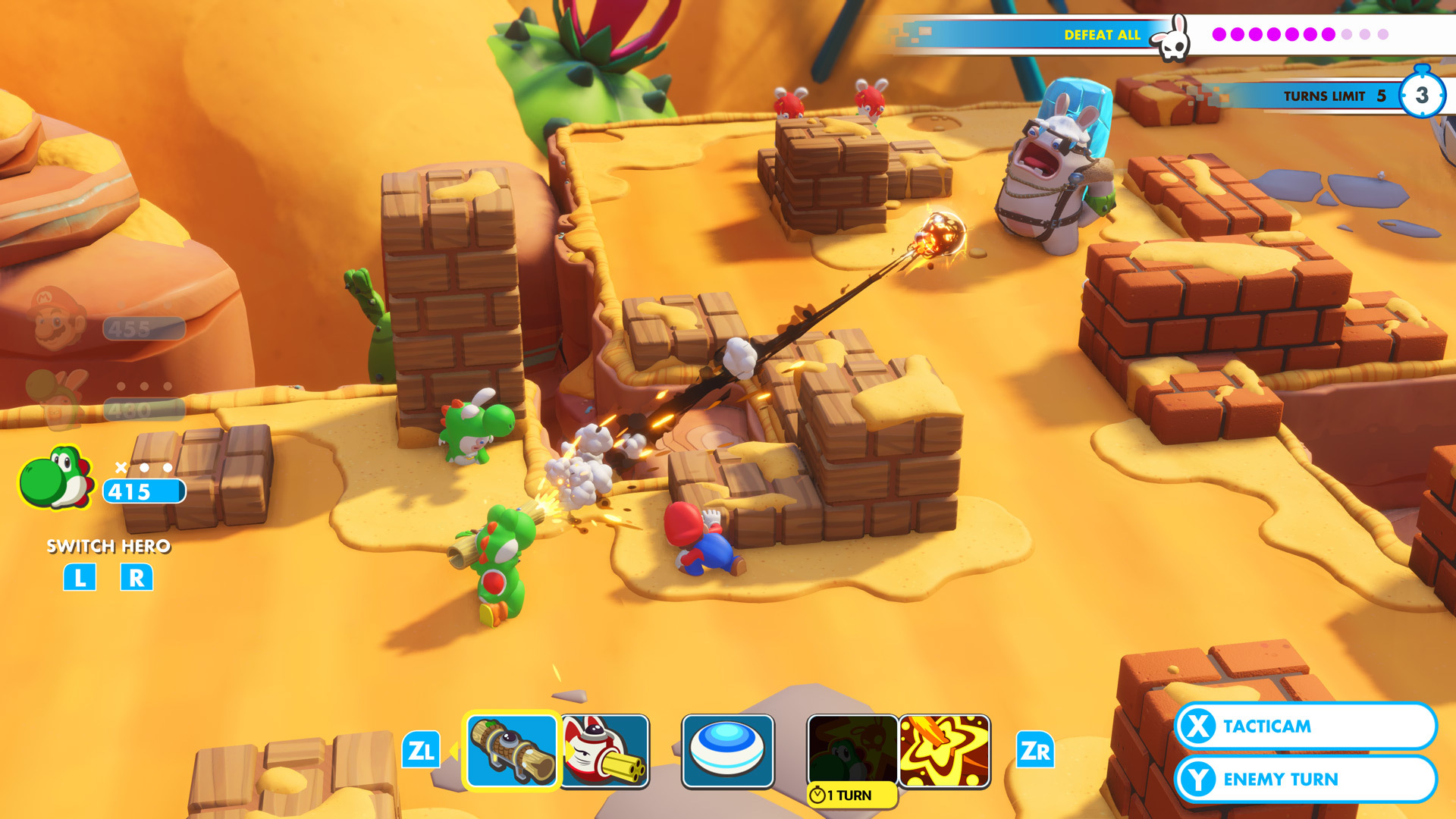 The tone of Mario + Rabbids is an interesting point to touch on. The humor of Ubisoft’s Rabbids series is entirely present in Kingdom Battle, which means lots of slapstick antics and screaming. However, the Mario characters add a nice balance and, in many situations, serve to mellow out the Rabbids. The humor overall is a bit hit or miss. There were a decent number of scenes that were fairly charming or funny, yet there were also moments that felt entirely out of place in a game containing Mario characters. For instance, an early foe in Kingdom Battle is Bowser Jr., who upon introductions acts more or less how you’d expect. That is until he mentions upon leaving the scene that he has some “daddy issues to go repress.” Lines like this crop up every now and again, and one can’t help to roll their eyes when they appear, especially coming out of a Mario characters mouth.

On the other hand, one aspect of the humor that was very well done are the Rabbid counterparts to the Mario heroes. In simple terms, the Rabbid counterparts act like the Mario characters they’re based off, but overly exaggerated to great effect. Rabbid Mario acts like a burly tough guy with a tooth pick in his mouth, while Rabbid Luigi acts very meek and goofy whenever he’s in a scene. It’s very entertaining to see the Mario characters interact with their Rabbid partners and vice-versa, and made for very charming scenes throughout. The Rabbid heroes, along with the Rabbid villains are very fun to watch, and boss fights are often made a spectacle because of the situations or roles the bosses have throughout.

Mario + Rabbids looks good on the Switch. The art style of the game lends itself to a lot of the softer shapes that the environments and character designs utilize, and overall feels pretty imaginative. The incorporation of real world objects enlarged several times over make for interesting set-pieces to come across, and the way they’re introduced into the environment is more-often than not very fun to see. While traveling along the overworld the frame rate is smooth and is the case most of the time while in battle as well, only dropping a handful of times during certain actions or animations. The music in Mario + Rabbids is also fairly good, though many tracks end up feeling forgettable at the end of the day. The tracks that stand out the most end up being the remixed or reimagined songs from the Mario games, particularly the rendition of Peach’s Castle from Super Mario 64.

Mario + Rabbids Kingdom Battle is a surprisingly deep package, in terms of both gameplay and content. While some of the finer elements of its strategy gameplay may end up a bit muddled or confused along the way, Kingdom Battle still has a lot of depth and challenge to keep players invested. The humor of Ubisoft’s Rabbids won’t be for everyone, but the presence of Mario and friends help to add a nice balance to their wacky antics and add a lot of charm when the two worlds collide. Overall, Mario + Rabbids Kingdom Battle is an endearing adventure that has a lot to offer, and shows that even Nintendo’s biggest properties can lend themselves to the most unlikely of partners.

Mario + Rabbids Kingdom Battle review copy provided by Ubisoft for the purposes of this review.