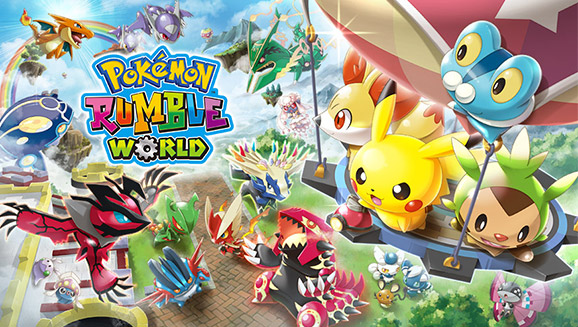 In Famitsu’s most recent issue, the magazine caught up with Ambrella director Norio Matsumura and president Muneaki Ozawa. The two sides chatted all about the free-to-play 3DS game Pokemon Rumble World.

One of the most notable questions Famitsu asks is why the team decided to try out the F2P model. Matsumura noted that it actually happened thanks to a suggestion from Pokemon president Tsunekazu Ishihara.

Mr. Ishihara (the president of the Pokemon Company) suggested: “Let’s try out F2P.” Personally I think that refreshing controls and the nature of continuously returning to the game are concepts which suit free games very well, so I thought there was a chance of success. However, many members of the staff are against F2P games…

Matsumura continued on his comments by talking about how development didn’t progress without some resistance:

It felt like a dream that more people could play the game when it’s distributed through the eShop for free. On the other hand, many staff members of our company like traditional packaged titles, so they voiced opinions like, “I’m afraid of a title in which you can pay infinitely and it is out of my league.” As that was the case, I thought people could play with peace of mind if there was an upper limit for in-game purchases.

Next, Matsumura and Osawa commented on what Pokemon Rumble World’s development focus was:

Matsumura: We realized we had to increase the overall tempo for this game. If we want the player to return to the game often, the player must not feel stress and must not have to wait even for short periods of time. If the tempo wasn’t increased, the player wouldn’t construct a long relationship with the game.

Osawa: We did things like increase the tempo of parts which tie scenes together and remove the title screen.

Finally, Matsumura touched on why auto attack was implemented. In doing so, he also revealed that automatic movement was considered at one point.

Auto attack was implemented so that more people could enjoy the game. When we observed people who had no experience with the series, there were many who played the game without pressing the attack button. That’s why we considered attacking automatically and ended up implementing the feature. By the way, we also had an idea for automatic movement.

Pokemon Rumble World is available for 3DS via the eShop.