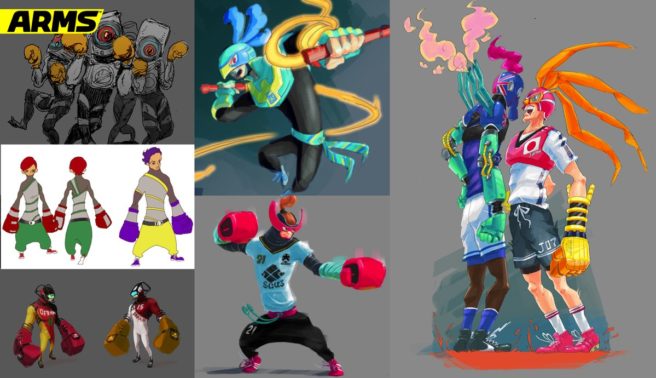 Splatoon wasn’t the only Nintendo game with a panel at GDC today. ARMS producer Kosuke Yabuki was also at the event to talk about ARMS.

During his panel, Yabuki showed prototypes, concept art, and more. We’re even able to get a glimpse at the comic that will be provided out on Free Comic Book Day.

– Over 100 character style art directions were considered
– They also considered using existing IP like Yoshi (tongue) or Link (hookshots)
– Branding was inspired by using fake brands in Mario Kart
– They wanted a “tennis-like” fight gameplay experience
– “We put a lot of effort into portraying the athletic bodies of the fighters. This is …a bit different from Mario Kart”
– Due to the sheer number of arm and character combinations, they used AI to test them during development
– They have been looking at player data for win percentages post-release
– Focused on visible punch trajectory and simple gameplay
– “The answer to ‘why do ARMS characters have extendable arms’ is because Nintendo”
– Character design for ARMS went: Spring Man > Ribbon Girl > Chains > Bandages > Min Min > Kid Cobra > Mechanica > Helix > Twintelle > Byte and Bark
– Top ARMS players use the Pro Controller mostly, but there are a few motion controller champions who prefer to throw punches
– Fighter growth has been slow and steady, keeping the balance where possible

And here are all of the notable images from the panel: