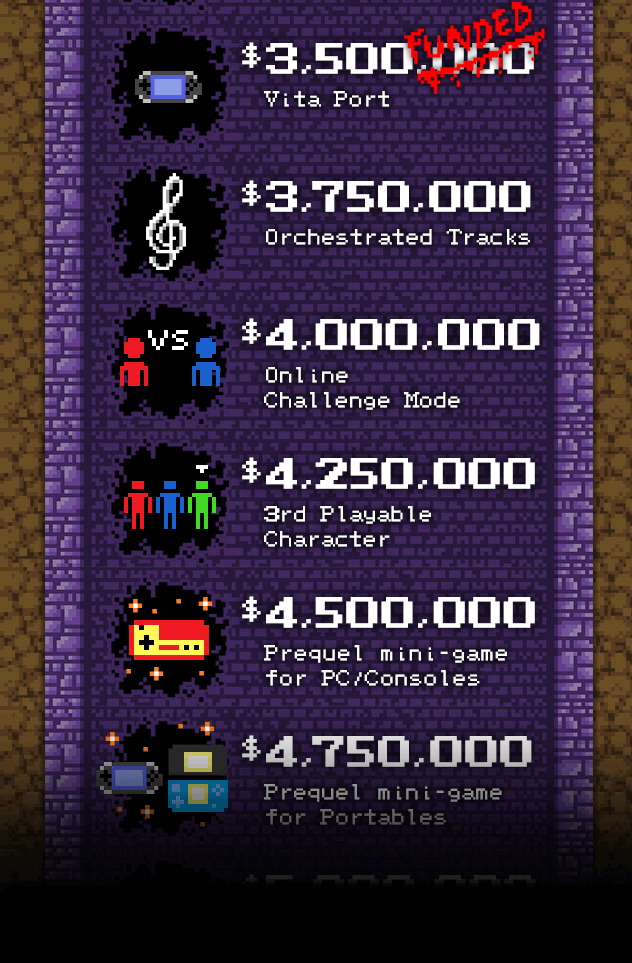 A number of new stretch goals have been announced for the Bloodstained: Ritual of the Night Kickstarter.

The orchestrated tracks goal, which was previously announced, is the most attainable. Bloodstained’s Kickstarter will need to reach $3.75 million for this to happen.

Speaking of that prequel mini-game, here’s an overview of that:

PREQUEL MINI-GAME FOR CONSOLES: Inti Creates is so excited about Bloodstained that they’re hoping to create a 2D, pixel-based, retro-styled mini-game that sheds some light on the world of Bloodstained before Miriam awoke from her coma. This is a complete game which will be sold separately, but every $28+ backer copy of Bloodstained will come with a FREE download of this game on PS4, XB1, Wii U, or PC! (Backers at Physical+Digital tiers will be eligible for 2 copies of the mini-game.)

PREQUEL MINI-GAME FOR PORTABLES: At $4.75 million Inti will port their side story game to the PS Vita and Nintendo 3DS. Backers $28 and up will be able to choose any platform for their free copy (or copies)!

With only six days remaining in Bloodstained’s campaign, it’s admittedly going to be difficult to reach those latter stretch goals. It’s be very neat to see that prequel mini-game happen, however.

You can find Bloodstained: Ritual of the Night on Kickstarter here.