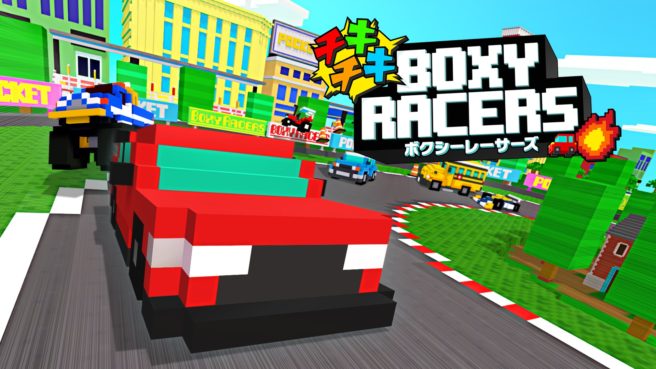 Over on the Japanese eShop, a listing shows a new Switch game from Poketto. The company is releasing Boxy Racers on January 25 for 980 yen.

Boxy Racers is a racing game with block-like voxel visuals. It has two steering modes: handle mode and stick mode. The latter lets you drift easily just by using a stick.

Multiplayer is supported from two to eight players. There are also four types of party games available:

1. Coins: Collect coins on the stage; there’s also a slot machine where players can try to get the jackpot
2. Smash: Tackle opponents to drop them to the sea; the player who drops fives times gets disqualified
3. Paint: Drive to paint the stage with the player’s color; the player who has the largest area at the end wins
4. Goal: Players are split into two teams that compete to shoot something (like a soccer ball) towards the opponent goal; teamwork will be essential here

Boxy Racers has twelve courses compromised of three main themes. City, jungle, and beach areas have four variations each. Twenty cars are included, and becoming a champion in a course will unlock new ones.