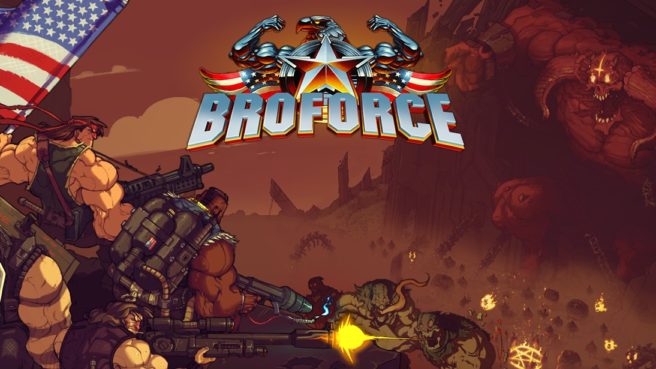 Though it wasn’t mentioned in today’s Indie Highlights video, we’ve heard separately from Nintendo of America regarding Broforce’s launch date on Switch. Devolver Digital will publish the game on September 6.

Broforce will be the final title from Devolver Digital on Switch this summer. Past releases include the Enter the Gungeon – Advanced Gungeons & Draguns update, Crossing Souls, Not a Hero, and Minit. The Messenger will launch on August 30.

Here’s an overview for Broforce, along with a trailer:

When evil threatens the world, the world calls on Broforce – an under-funded, over-powered paramilitary organization dealing exclusively in excessive force. Brace your loins with up to four players to run ‘n’ gun as dozens of different bros and eliminate the opposing terrorist forces that threaten our way of life. Unleash scores of unique weapons and set off incredible chain reactions of fire, napalm, and limbs in the name of freedom.

– The Broforce: Deliver your own brand of shock and awe with dozens of bros each with their own unique weaponry and special attacks designed to dispatch freedom across the world.
– Bro-Op & Deathmatch: Battle terrorism with up to four players in cooperative mode or sever ties with your bros and face each other in several bombastic competitive modes.
– Explosion Run: Join up with other bros to tackle these unique time attack levels under the pressure of exploding terrains and mass chaos.
– Fully Destructible Everything: Destructible terrain opens up a slew of strategic options while the abundance of – Exploding Red Barrels of Justice can literally level the playing field with one shot.
– Level Editor: Design your own playground of destruction with a robust level editor and become the envy of all the other bros by sharing them online. Browse through scores of custom user created levels and complete them to rate their Bro-ness.