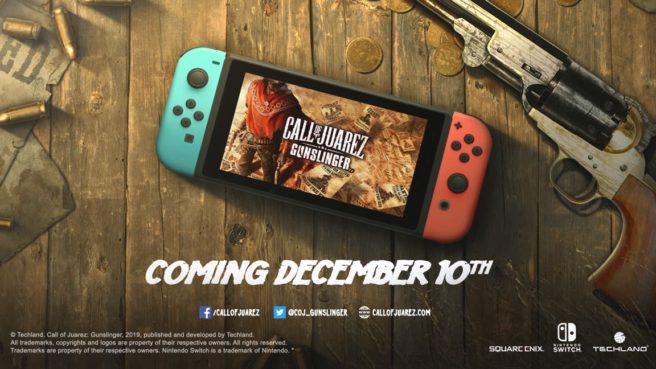 Following a few different leaks and teases, Call of Juarez: Gunslinger has been officially announced for Switch. Publisher Square Enix and developer Techland will release the game on December 10.

Call of Juarez: Gunslinger, a first-person shooter, will support motion controls and HD Rumble on Switch. More information can be found below, along with a trailer.

Feel like a true Gunslinger thanks to Nintendo’s motion control and HD Rumble.

Stand Against the Deadliest Gunslingers Who Ever Lived

From gold mines to saloons, Call of Juarez: Gunslinger is a real homage to the Wild West tales. Live the epic and violent journey of a ruthless bounty hunter on the trail of the West’s most notorious outlaws. Blurring the lines between man and myth, this adventure made of memorable encounters unveils the untold truth behind some of the greatest legends of the Old West.

Billy the Kid, Pat Garrett, Jesse James… Face down the Wild West’s most notorious gunslingers and live the untold stories behind the legends.

John Hardin – Hardin was deadly and dangerous. Some sources claim, that he had killed 42 men. He dodged the law many times, but finally was arrested and sentenced for 25 years in prison. During imprisonment he even managed to finish his law studies. Eventually after 17 years Hardin was released and then pardoned.

Jesse James – He is undoubtedly the most famous member of the James-Younger Gang and is recognizable even by people who are not particularly interested in western genre. Jesse James is often mistakenly considered as an heroic outlaw, who “robbed from the rich and gave to the poor”. In fact there is no evidence of such actions done by him.

Billy the Kid – It is told that Billy killed people with a smile on his face, so in the game we gave his appearance some bright colors, like bloody red, which is typical for pop culture. He also wears a crooked hat which makes him look more like a rock star among western outlaws.

Butch Cassidy – This infamous outlaw – also known as Robert Leroy Parker – was the leader of the Wild Bunch Gang. His long-term partner-in-crime was Sundance Kid a.k.a. Harry Alonzo Longabaugh. Together they performed the longest string of successful train and bank robberies in American history.
and many more…

Personalize your skills and master your weapons to unleash lethal combos and become the best gunslinger the Wild West has ever seen.

Relive the Glory of the Wild West

Blaze a trail through the wilderness and stunning landscapes of the Old West and live an epic adventure of a ruthless bounty hunter on a journey made of all-out gun battles.