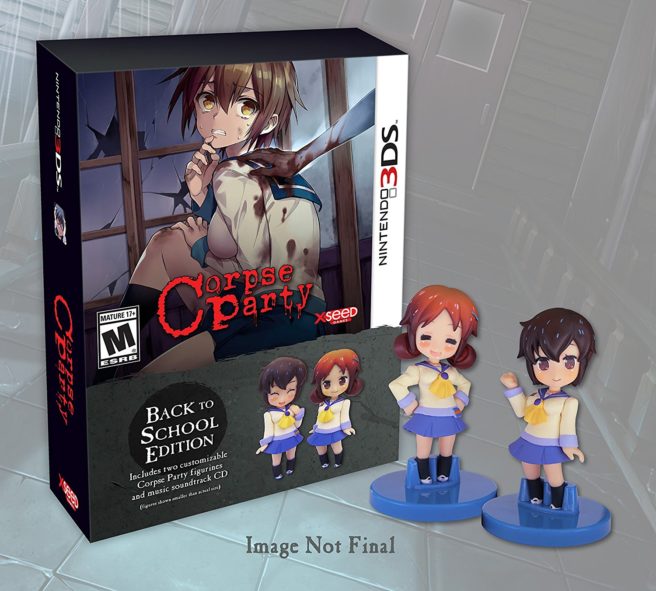 XSEED has finally confirmed that Corpse Party will arrive in North America on October 25. It will cost $50 at retail as part of the limited “Back to School Edition” physical release, and a $30 digital option will also be available.

Corpse Party is also slated for Europe, where it will only be sold digitally starting on October 26.

In other news, Exile’s End is also coming out on October 25, but not on Wii U. XSEED says details regarding the eShop version and European release “will be provided at a later time.” When we do see it, the title will cost $9.99.

Head past the break for overviews of both Corpse Party and Exile’s End. We also have new assets for both below.

Corpse Party for Nintendo 3DS will be released physically for the first time in English through a limited ‘Back to School Edition’ priced at $49.99, which will include high-quality miniature figurines of characters Naomi Nakashima and Seiko Shinohara, as well as a soundtrack CD containing nearly 80 minutes of music from the game not previously featured on the ‘Songs of the Dead’ compilation, including three tracks exclusive to this Nintendo 3DS version. In addition to the limited ‘Back to School Edition’ physical release, Corpse Party will also see a digital release on the North American Nintendo eShop on Nintendo 3DS for $29.99. The title will also see a digital-only release on the European Nintendo eShop on Nintendo 3DS for €29.99/£24.99, as well as in Australia for $49.95 AUD.

Originally developed as an independent title by Team GrisGris and published by XSEED Games, Corpse Party will release for Nintendo 3DS in North America on October 25, 2016. The European version will launch on October 26, 2016. This title has been rated “M for Mature” by the ESRB, PEGI 18, USK 18, and R 18+ by the ACB.


[Platforms: PS4 and “PSVita”; Release Date: October 25, 2016] Exile’s End is a dark and futuristic 2D sidescroller offering adventure-style puzzles, tightly-controlled platforming, and dangerous extraterrestrials. The game was developed as an homage to early ’90s action-adventure PC games, drawing heavy gameplay inspiration from classics of the genre as well as thematic influence from ’80s sci-fi films and anime. Boasting uniquely stylized cutscenes, multiple endings, and an atmospheric soundtrack by Keiji Yamagishi of Ninja Gaiden and Tecmo Super Bowl fame, Exile’s End will have players investigate a massive, interconnected alien world and experience a story filled with ancient riddles and modern-day hubris. Backed by Japanese publisher Marvelous Inc. and originally released for Windows PC, Mac and Linux via Steam, Exile’s End is a collaboration between Tokyo-based indie game developer Matt Fielding and many talented local industry veterans, including art by staff from titles such as Secret of Mana, Mother 3 and more.

Developed by Magnetic Realms and published in North America by XSEED Games, Exile’s End will enter orbit digitally on PS4 and “PSVita” via the PlayStation Store in North America on October 25, 2016 for $9.99. More information on the North American Wii U  digital release, as well as European release details, will be provided at a later time. This title has been rated “T for Teen” by the ESRB, PEGI 12, USK 6, and PG by the ACB.