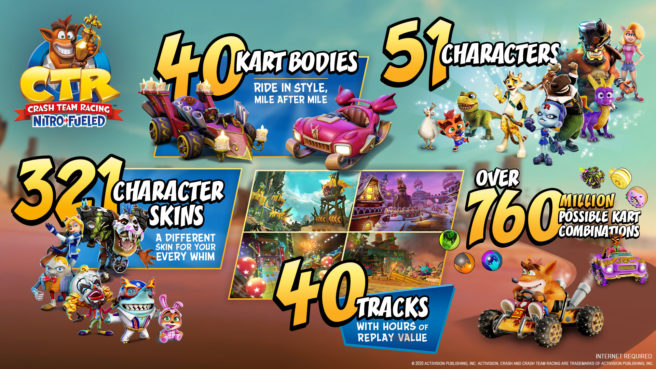 Crash Team Racing Nitro-Fueled has been supported with a bunch of new content over the past few months in the form of Grand Prixs. Developer Beenox has announced that there will be one final event, and then that’ll be it. Details on the last Grand Prix will be shared next week.

In other news, Beenox has shared first details on a new challenge system. “The race continues as soon as the final Grand Prix ends, with a brand new challenge system. This system gives any driver the opportunity to master challenges, earn Wumpa coins, and further customize their experience with items in the Pit Stop,” the developer says. Daily, Weekly, and Pro (Monthly) challenges are planned, and you can complete them to earn Wumpa Coins for use in the Pit Stop.

Here’s the full update from Beenox, which also includes information regarding time trials and new items:

Bandicoots, details about the new Grand Prix season will be coming next week, but in the meantime we wanted to give you a quick update.

Through the Grand Prix, we’ve delivered fresh, new content to Crash Team Racing Nitro-Fueled. Our community has raced through the multitude of new tracks and challenges with each season and have amassed an amazing collection of new characters and skins and shown their style in insane new ways by customizing all their karts.

We truly have loved creating all this content, and above all we’ve been thrilled by your support. We’re happy to say that although the Grand Prix seasons are rounding out, current and new players alike will still be able to enjoy all the game modes (including online matchmaking), as well as a new ongoing challenge system, new time trials to complete and even a new drop of characters, skins and karts that will hit the track shortly after the final Grand Prix Season (including a long-awaited item that we think fans will be very happy about).

Read on for a celebration of the Grand Prix seasons and for details on what’s next for CTR Nitro-Fueled!

A Recap of the Grand Prix

Since the launch of Crash Team Racing Nitro-Fueled, we will have had 8 Grand Prix seasons that ranged from Spooky to Apocalyptic to Prehistoric in their theme. We’ve been able to introduce hosts of new content that lean into those various themes and build tracks with the n.sane identities that are perfect fit for Crash and Co. We’ve always strived to deliver unique and awesome content that stays true to the spirit of Crash. Because our community includes newcomers and those who have been with Crash since his race began, our commitment to giving a breadth of fun content has been at an all-time high since CTR Nitro-Fueled launched.

Through the Grand Prix, we’ve welcomed many new characters to expand our roster of racers to over 50, including Spyro, Nina Cortex as well as Tawna and the newly-named Nitro Squad.

Plus, with all the tracks added to the game through the Grand Prix, players will have raced on 40 tracks and 12 Battle Arenas that range from the originals from CTR and Crash Nitro Kart, as well as new ones that lean into various moments from Crash lore and the themes of the Grand Prix. Players can continue to experience these tracks throughout the Local Arcade and Online Matchmaking modes.

In addition to the multitude of ways to play, we brought customization to Crash Team Racing for the first time, bringing CTR’s total to 321 skins, 40 kart bodies and tons of kart customization items which provide over 760 million different possible kart combinations – – each one celebrating the creativity and fun of the CTR Nitro-Fueled community!

The race continues as soon as the final Grand Prix ends, with a brand new challenge system. This system gives any driver the opportunity to master challenges, earn Wumpa coins, and further customize their experience with items in the Pit Stop. There will be challenges relevant to all game modes, so players can race and play CTR Nitro-Fueled the way they enjoy most.

Three challenge types will remain active: Daily, Weekly, and Pro (Monthly). Completing challenges will give players varying amounts of Wumpa Coins that they can use in the Pit Stop.

The Pit Stop will feature items from each Grand Prix season. Players will be able to view a variety of items by refreshing the Pit Stop screen up to 2 times per day, to give them more daily options to choose from when customizing their CTR Nitro-Fueled experience.

Oxide is no longer the king of the track – – going live after the final Grand Prix there will be a set of Time Trial records that will be a challenge for even the best CTR racers to beat! These track times will be based on some of the best times achieved by the Beenox team on each individual track. So the challenge is posed for the best racers out there – – can you beatus? By doing so on all tracks, you can unlock a special reward that will let others know you’ve got some serious CTR skills!

Finally, while the Grand Prix is ending, there will still be more items coming to CTR Nitro-Fueled.

Look out for these future additions:

Thanks for enjoying the Grand Prix seasons – – we’ve had a blast making them and seeing how much joy our fans have got from them. The race goes on, though, and we’re excited to continue to see you on the track.