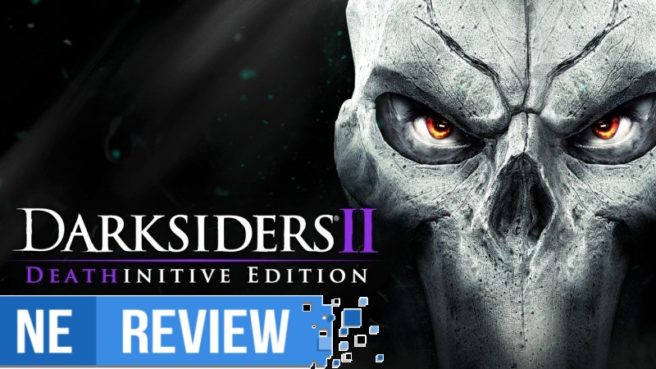 Earlier this year, THQ Nordic treated us to a rather lovely Switch port of Darksiders – titled Darksiders Warmastered Edition – that proved, if nothing else, to be a bit of a technical achievement. Being a fast-paced hack and slasher that relies on precise inputs and visual cues, it gave Switch owners the choice of either playing the game at high resolution and 30 frames per second, or at a lower resolution whilst running at 60 frames per second. This choice, and the work that went into making it possible, resulted in a technically magnificent game that drew plenty of praise across the Switch community. As we near the all-important holiday season, THQ Nordic has decided to bolster its late 2019 lineup with a Switch port of the game’s sequel, Darksiders II Deathinitive Edition.

I know the clue is right there in the title, but nevertheless, in Darksiders II you play as Death, Horseman of the Apocalypse, who is without a doubt the edgiest of his three counterparts. The story takes place alongside the events of the original Darksiders as Death tries to prove the innocence of his fellow horse-mate, War, by resurrecting humanity and undoing the damage caused by War’s presence on Earth in the first game. The overall concept is engaging, but Darksiders II tries way too hard to make its people and places feel more meaningful than they actually are. Death himself is a broody stereotype, and he looks as though he’s been ripped from the cover of a 1995 power-metal album. The supporting characters and the places they inhabit do a good enough job of evoking a believable high-fantasy setting, but in 2019 their overall design feels uninspired – kind of like an off-brand World of Warcraft clone – and despite their grandiose titles (Lord of Bones, Architects of Creation) you rarely see anyone or anywhere that really captures the imagination, or capitalizes on the premise of the plot. 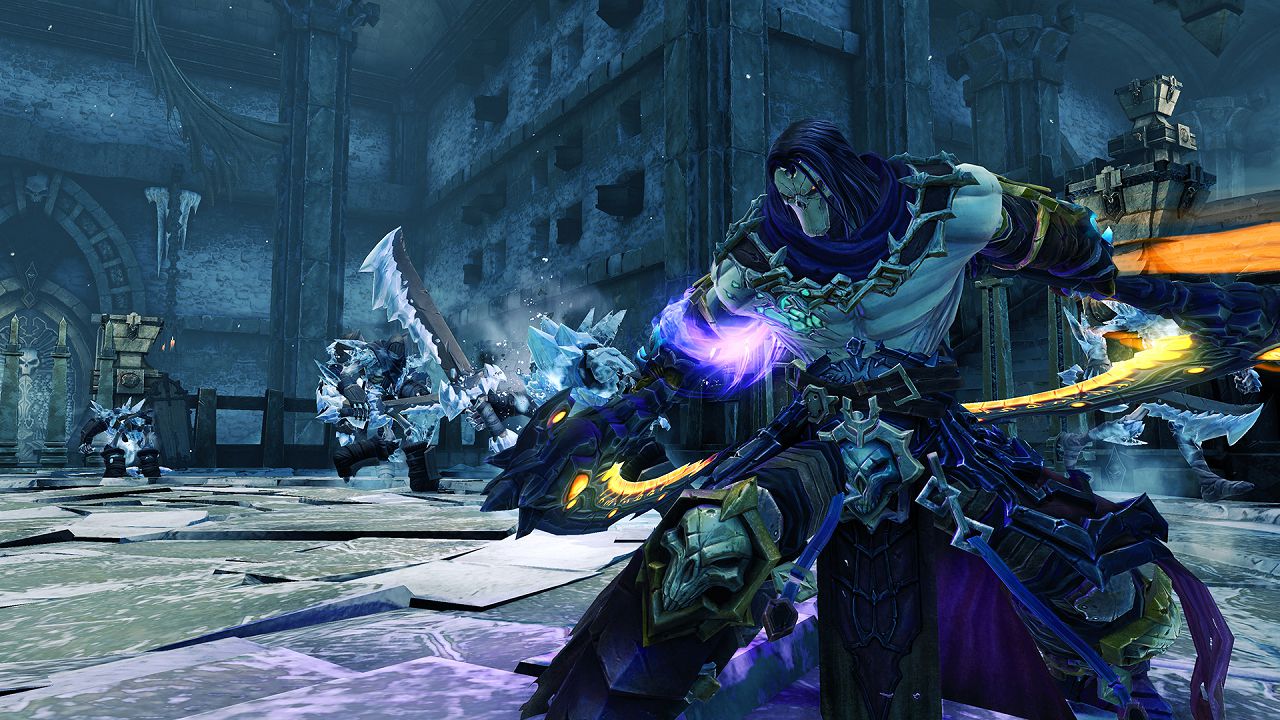 The Blizzard DNA of Darksiders II doesn’t end at the visuals either. One of the game’s core elements is a gratifying loot mechanic, not too dissimilar to the one found in Diablo III or any MMORPG for that matter. Over the course of your journey, you regularly come across new pieces of armor and weaponry that improve Death’s chances of not fulfilling his namesake, and it’s here – in conjunction with the game’s combat – that Darksiders II has the most to offer you as you play through its campaign. Crucially, the experience never feels totally dictated by arbitrary equipment stats thanks to its God of War-style combat that eschews button mashing in favor of timed attacks, combos, and dodging – all of which put the main emphasis on your skill, as opposed to some numbers that are attached to your sword. The difficulty of the combat is lenient, but I did have some trouble during boss fights that thankfully never totally overwhelmed me – instead they simply encouraged me to take a step back, learn my combos, and to be patient.

Those boss fights were mostly found at the end of the game’s other main attraction – its dungeons. Many parallels have been drawn in the past between Darksiders II’s over-world/dungeons and The Legend of Zelda, and I’m going to add to the chorus here – yes, the two are remarkably similar, and often to Darksiders’ detriment. Zelda is a monolithic franchise that exudes creativity and objective quality at almost every turn – whereas Darksiders II, well, doesn’t. Platforming and puzzling are common pursuits as you navigate both the over-world and the game’s many dungeons, but there’s a frustrating lack of polish and fluidity to these elements that makes the entire endeavor feel stiff and lifeless. The designs are varied, but the tasks you undertake during these sequences don’t deviate much throughout the entire campaign – with the platforming in particular becoming achingly monotonous by the time you reach the end of Death’s journey. Next to the satisfying combat, it makes the game feel disjointed, and lacking in cohesion. 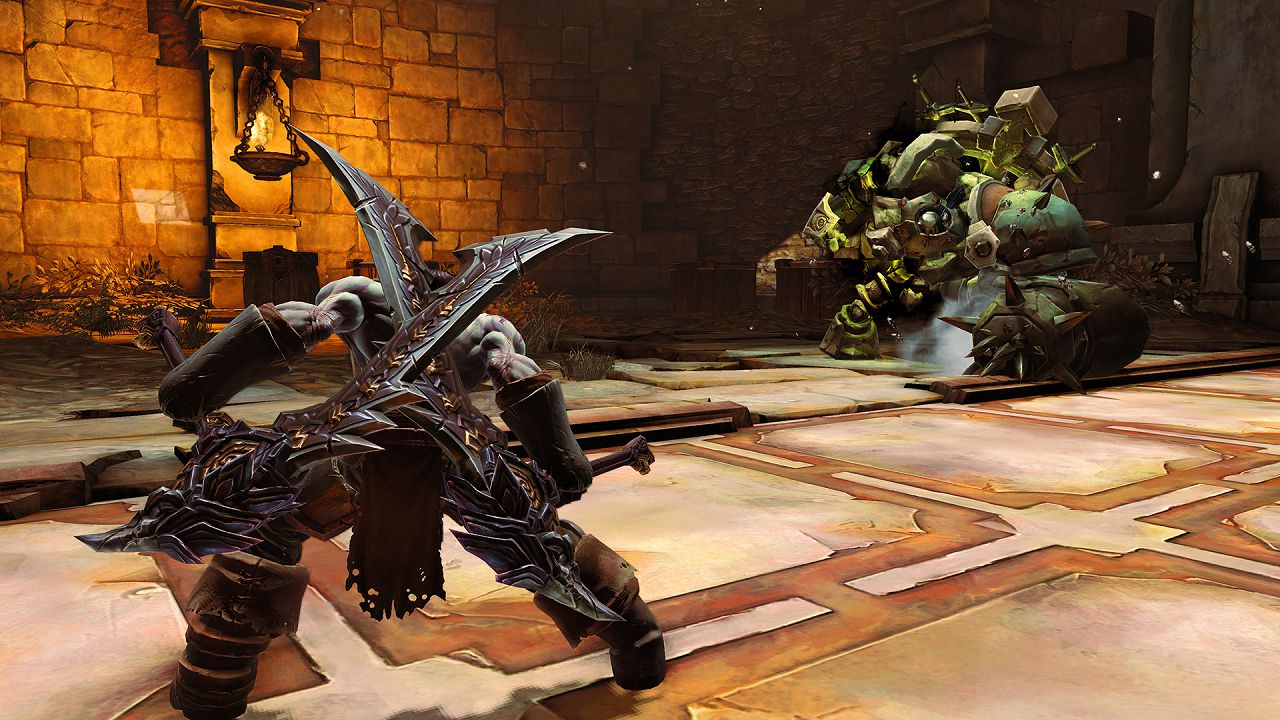 Now this is an awkward callback, but remember when I mentioned how technically proficient the original Darksiders was on Switch? How the game offered you the choice between either higher fidelity or smoother performance? The reason I wanted to highlight that, is because it shines a light on one of its sequel’s biggest missteps. Whether you like it or not, Darksiders II is a 30 frames per second game on Nintendo’s hybrid, and the absence of any high performance option really hurts the overall experience. Making matters worse, the game often has trouble meeting that frame rate target, and it also has a tendency to aggressively scale the resolution down when the action gets intense (and when the environments get larger). These issues often end up turning Darksiders II into quite an ugly and illegible game, which is a considerable disappointment when put next to the original Darksiders’ achievements on Switch. It’s worth noting that the original release of Darksiders II Deathinitive Edition on other consoles is also locked to 30 frames per second, but that doesn’t detract from the stark difference Switch owners will experience between the first game and its sequel.

Overall then, Darksiders II feels like a bit of a mixed bag. For one, the combat and loot elements have a delightfully moreish appeal that will likely keep you sustained over the course of the game, but thanks to the stiff platforming, uninspired story, and slew of technical setbacks, I can’t wholly recommend it – especially on Switch. If you enjoyed the first Darksiders and you’re ravenous for more Horseman-antics, then you’ll likely enjoy, or rather, persevere, through what’s on offer here. However, if this your first rodeo as a harbinger of the apocalypse, I’d recommend picking up Darksiders II’s predecessor any day of the week. It runs smoother, it looks better, and feels far more attuned to the console in question.

Darksiders II Deathinitive Edition review copy provided by THQ Nordic for the purposes of this review.