Posted on January 4, 2019 by Brian(@NE_Brian) in News, Screenshots, Switch 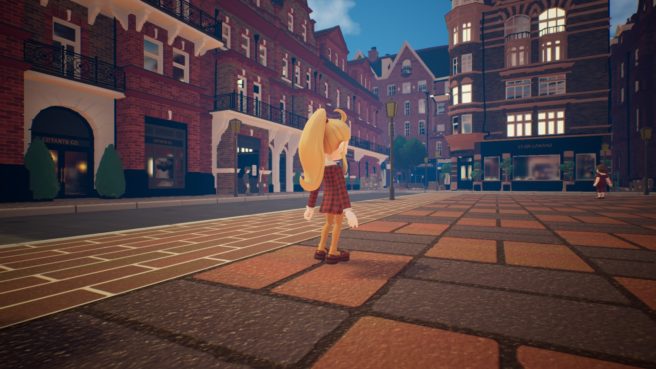 – Begins on January 1, 2000
– In Clocknee, an event known as the “stopped time” incident occurred
– Sherry and Pegreo, who were fortunate enough to escape the incident, go on a journey to restore the town alongside the time-traveling robot Isaac
– Time travel using Isaac’s unique functionality
– Go to the Clocknee of 30 years in the past
– In the Clocknee of the past, there was a strange rumor going around about the department store “Save the Queen” that ghosts are appearing
– In order to discover its secret, Sherry and company team up with a boy they meet in that era
– Inside the closed department store, there seem to be robots having some sort of discussion

– A boy Sherry and company meet in the past Clocknee
– He has a rough personality, but a strong sense of justice
– He is investigating the secret of the town’s department store “Save the Queen”

– Truth’s good friend
– He often follows Truth, who tends to bump heads with others
– Loves to eat

– Not only is Isaac equipped with the time travel functionality necessary to resolve the stopped time incident in Clocknee, he is also essential in battle
– By visiting the town’s workshop “BcFarlane Collectibles,” you can also modify and strengthen Isaac

– Isaac’s capabilities will increase by installing “gears” into empty slots
– Create gears by collecting parts dropped by enemies
– Three types of gears: gold, silver, and copper
– The better the gear you install, the higher the increase in Isaac’s capabilities
– As Isaac’s level increases, more powerful slots will unlock

– As you progress through the game, you will be able to use the “Form Change” ability
– This powers up and transforms Isaac in battle
– Six forms with different base stats and learnable skills
– Form Change does not waste a turn and can be used any number of times in battle
– Strengthening via slots and gears is available for each form

– Isaac’s main form
– A steel guardian that protects everyone with its heavy armor
– Bad at avoiding attacks
– It can use abilities such as “Iron Wall,” which increases the defense power of the entire party, and “Radiant Beam,” which attacks all enemies

– With the “Medical Shower” ability that can heal all of the party’s HP, Isaac’s Rescue Form is an effective form to use when you want to heal wounded allies
– By using the “Hazmat Cleanup” skill, you can attack a single enemy while lowering its attack power
– This form should come in handy in a pinch