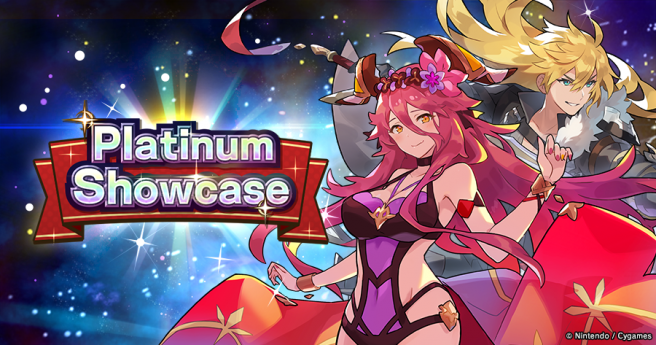 A Platinum Showcase and a Shadow Focus Summon Showcase are live now in Dragalia Lost. While shadow-attuned adventurers and dragons will appear in both of these showcases, the Platinum showcase can only be used to summon 2 times and these summons can only be redeemed with diamantium (which requires a separate purchase).

Both of these summoning events last until September 26, 2021 at 10:59pm PT. And more specific details about the adventurers available are included below.

Get a closer look at some of the 5★ adventurers and a 5★ dragon eligible to appear in the Shadow Focus summon showcase below.
5★ adventurers:

During dragondrive:
consumes some of the user’s dragondrive gauge,
deals damage to surrounding enemies,
reduces their defense, inflicts shadowblight,
then fills 100% of this skill’s skill gauge after use.
Also, powers up the user’s standard attacks.
This standard attack buff will be lost automatically
when the effect’s remaining time is depleted
or when dragondrive is ended.

(Shadow) Dragon Haste +20%
If a team member is attuned to Shadow:
increases their dragon gauge fill rate by 20%.
Benefits your whole team.

Summer Sparks II
Grants the user a dragondrive gauge, and changes
the shapeshift button into a dragondrive button.
Tapping this button activates their dragondrive.

(Shadow) Dragon Damage +12%
If a team member is attuned to Shadow:
adds 12% to the modifier applied to their
damage when in dragon form.
Benefits your whole team.

Shapeshift Prep & Dragon Defense
Fills 25% of the dragon gauge at the start of quests,
and increases defense by 25% when in dragon form.

Dragon’s Fierce Rule II
Grants the user’s attacks the ability to dispel
one enemy buff when in dragon form.
This effect does not apply to the damage
dealt as the user shapeshifts.

・The stats shown here do not include increases or decreases due to abilities, and represent the adventurers at level 80 with 50 mana nodes unlocked, not the stats when first obtained.
・Adventurers with the same name cannot be put into the same team.
5★ dragon:

(Shadow) Strength & High Dragon’s Might V
If the user is attuned to Shadow:
increases strength by 65%, and increases strength
by a further 20% for the remainder of the quest upon
shapeshifting, up to twice per quest.

(Shadow) Steeled Dragon’s Endurance II
If the user is attuned to Shadow:
increases max HP by 30% for the remainder of
the quest upon shapeshifting for the second time.

・The stats shown here represent the dragon at maximum level, maximum bond, and fully unbound. They do not represent the stats when first obtained.