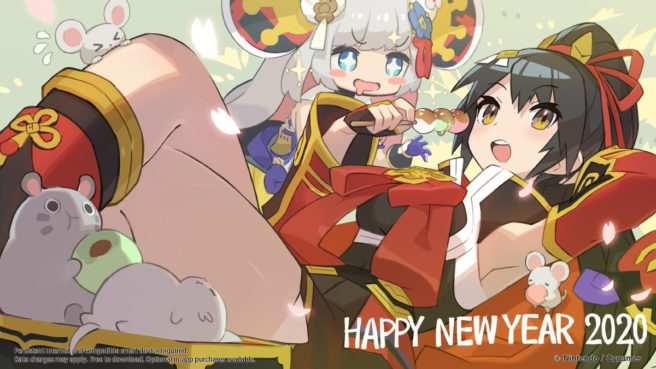 Dragalia Lost director Yuji Okada today published the latest “This Month in Dragalia Lost” letter. In it, Okada goes over the upcoming Monster Hunter collaboration event, teases some plans for 2020, and more.

Here’s the piece in full:

Happy New Year!
Yuji Okada here, director of the Dragalia Lost game. I hope you’ll continue to enjoy playing Dragalia Lost this year!
Since this is the first This Month in Dragalia Lost for the new year, naturally I have information about events that will occur this month, but I also plan to talk a little bit about the Monster Hunter event we announced at the end of last year.
■Regarding New Year’s Tidings: A Clawful Caper

The New Year’s Tidings: A Clawful Caper event, which started yesterday, features a new raid boss, Ebisu. If you defeat the Sunrise Snapper that appears in the Ebisu battle, the rewards will get even better.
Hanabusa, an adventurer you can befriend in this event, makes some pretty unique faces during battle, and his adventurer story is super interesting, so be sure to check it out!
There are also weapons you can only get during this event.

The adventurers you can get from the summon showcase are also very unique and powerful.
・Mitsuhide (adventurer)
Mitsuhide’s quick attacks are emblematic of the dagger weapon type, and her strength increases as her combo count goes up. On top of that, with her Paralyzed Punisher ability, she can work well with other light-attuned adventurers.
・Nobunaga (adventurer)

Nobunaga has a special skill that lets her remove enemies’ buffs. Then, when her combo count reaches a certain number, she can even remove buff effects with her force strikes. If the buff effect that is removed is Burning Ambition, which is applied by Nobunaga’s skill, the enemy will take damage.

Having a skill that removes buff effects will make her extremely useful in High Midgardsormr’s Trial: Master and Volk’s Wrath. She’s the type of adventurer that takes some strategy to use, but can build up firepower by raising her combo count!

・Chitose (adventurer)
Chitose can grant a buff that greatly increases the strength of light-attuned adventurers. I hope he’ll become a useful support adventurer for various quests, including the current raid boss.
・Daikokuten (dragon)
Daikokuten’s ability lets him boost strength when you maintain your combo count, so he’ll pair nicely with Mitsuhide.
・New Year’s Special Bonus and limited-time daily free tenfold summons
There’s a New Year’s Special Bonus and a limited-time daily free tenfold summon event going on. You can also get summon vouchers and wyrmite from the event, so I hope you’ll enjoy it.
The New Year’s Tidings: A Clawful Caper event and summon showcase are live until 12:59 AM, Jan 14, 2020.
■Regarding the Monster Hunter Event
I’d like to take some time to talk about the Monster Hunter event, which we announced at the end of last year. This event will have a story and a summon showcase, and I’m going to share a little info about one of the adventurers who will appear in that showcase!
It’s Berserker, and he’s all decked out in Rathalos armor!
This version of Berserker is a sword-user, but in Monster Hunter terms, he was designed as a Great Sword-user. When you charge up his force strike, you can use the powerful charge attack that is characteristic of Great Swords!
You’ll also be able to get Monster Hunter-inspired weapons during this event. Some follow designs from the source games, but there are also some brand-new designs with the Monster Hunter feel.In this event, there will also be a boss battle where you can place Barrel Bomb L items, but that’s not all of the Monster Hunter mechanics we’re planning on including in the boss battles. We’re also planning some boss enemies without elemental attunement, so we plan to make this event one that you can challenge using adventurers of various elements.
The Monster Hunter event will start in late January, so be sure to keep an eye on Twitter and your notifications for updates!

We will re-publish the pictures of Berserker and of the weapons that you can acquire during the event at a later date.
■Regarding Plans for January
We’ll be reviving the Flames of Reflection event in mid-January.
In this event, you can construct a facility that boosts the stats of flame-attuned adventurers, and we’re planning on raising the level cap for that facility.

We’ll be adding some story to chapter 11 of the main campaign in mid-January. This will be our first time trying this, but we plan to include things that are critical to the future of the story in here. Be sure to check it out! Chapter 12 will be added to the main campaign in February.

■Regarding Japanese Voice in Adventurer Stories for 5★ Adventurers
I probably should have shared this in December’s issue of This Month in Dragalia Lost, so I apologize for the delay. From December onward, the adventurer stories for 5★ adventurers will no longer be fully voiced in Japanese.
We came to this decision based on the number of upcoming 5★ adventurers and the frequency of additions to the main campaign. That said, Gala Dragalia adventurers will continue to be fully voiced in Japanese.

■Regarding the Next Update
The next update is scheduled for late January, and it’ll contain several feature additions that make the game easier to play.
We’ll share more details about the update’s content via notifications before it releases. But to give you just a little sneak peak, one feature we plan on adding will allow you to invite friends and other players who you encountered in co-op rooms to join your alliance.

■Regarding 2020
In January we were able to release a new raid event for the first time in a while.
Last year we added a lot of high-difficulty quests like The Agito Uprising and new difficulty levels for Advanced Dragon Trials, but this year I want to put a lot of effort into events as well.
We are currently working on creating a schedule that will allow us to release one new event per month.
As we continue to work on feature improvements so all of you players can keep enjoying the game in 2020, I also hope to work on improving the story and production of the game.
Also, we are currently developing the encyclopedia feature and a feature that will allow you to replay past events, as mentioned back in September. Please wait just a little bit longer.
The 1.5-year anniversary of Dragalia Lost is coming up in March, and I hope to be able to talk about our future update plans at that time, like I did at the first anniversary.■In Conclusion
I hope you continue to enjoy playing Dragalia Lost in 2020.
To thank you all for your continued support, we’ll be giving the following items to all players:

The next installment of This Month in Dragalia Lost will be posted around Feb 1, 2020 (JST).
Thanks for reading, and for continuing to play Dragalia Lost in the new year!