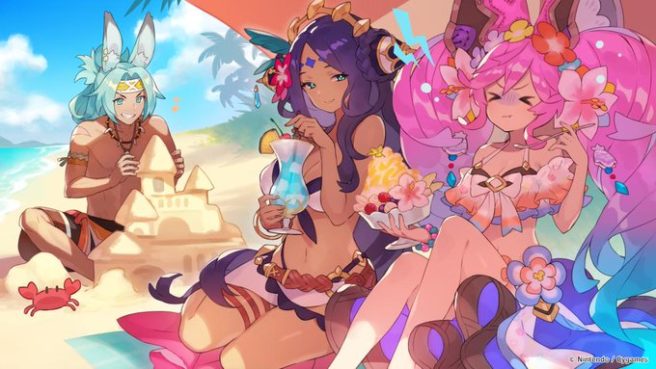 A new software update is on the way for Dragalia Lost, bringing the game up to Version 1.11.0.

The update will go live on August 26th. Official notes can be viewed below.

Update 1.11.0 will be available for download around 10:00 PM, Aug 26, 2019.
You may install it as soon as it’s available; otherwise, an automatic update will occur at approximately 10:00 PM, Aug 28, 2019.
Note: When you update to version 1.11.0 and play co-op, you will no longer be matched with players using earlier versions of the game. Rooms created by players playing earlier versions will not display in the Room List, and you will not be able to join them using Find a Room or Join Nearby Players. Additionally, if you input an ID using Enter an ID, the room will display, but you will not be able to enter it.
Note: Rooms created by alliance members playing earlier versions will be visible in the alliance chat, but you will not be able to join the room. The “All set, thanks!” message will display in such cases.
To celebrate the update, we’ll be sending all players a Tenfold Summon Voucher after the automatic update.
This notice will be modified after they’ve been distributed.
Note: The Tenfold Summon Voucher will not be distributed until after the automatic update, even if you complete the update to version 1.11.0 early.
■Update Details
・ Improvements for Various Displays During Quests
With the increase in the types of skills and abilities in the game, we will make it so that an icon showing the effects of skills and abilities will display for a short period of time during quests.
You can hide these displays by tapping the icon, or by disabling them in Options.

We will change the icons for buffs, debuffs, and afflictions to indicate their values and durations.

We will change how skill icons display to make it easier to tell whether the skill gauge is full.

Finally, in order to improve game performance, we will make it so that co-abilities no longer display at the start of quests.

・ Auto Feature Usable in Certain Co-op Quests
You will now be able to use the Auto feature in certain co-op quests.
Note: You will not be able to change the game speed.

On the results screen when you are victorious, it will now automatically check whether you wish to fight on.

The quest selection screen will now show your progress to make it easier to see what the highest currently unlocked quest level is.
Additionally, the item count will now display in the item details when you tap Next Reward in the top-right corner of the screen.

・ New Animation for Legendary Items
We have added an animation for when Legendary items, which are even rarer than Rare items, drop during quests.

Note: This will also be applied to certain items in a data update around 9:30 PM, Aug 28, 2019.
・ Adjustment to the Way 3D Models Are Viewed on the Details Screen
We will adjust how 3D models for adventurers or dragons can be viewed on the details screen.

・ Changes to How Afflictions Work
The changes to how afflictions work were postponed from the previous update, and will now be implemented.
Note: These changes will be applied in a data update around 9:30 PM, Aug 28, 2019.
We will adjust the effects of certain afflictions adventurers apply to enemies.
Note: There will be no changes to the effects of afflictions adventurers receive from enemies.
With the exception of afflictions that prevent enemies from acting, it will be possible to stack multiple afflictions.
See the following chart for more information.
○: Stacks ×: Does not stack
Additionally, for the poison, burn, paralysis, and blindness afflictions, we will adjust the affliction chance for the second time onward when adventurers attempt to inflict the same affliction on the same enemy.
Enemies will now be more susceptible to becoming afflicted from the second time onward.
■Balance Adjustments
・In Zodiark’s Trial, AI adventurers will now dodge Zodiark’s Accursed Venom attack.
・When Gala Cleo has used her Ancient Ray skill and the Altered Strike buff is in effect, we will make it possible to cancel her force strikes after activating them by dodging or moving.
The following adjustment will be applied in a data update around 9:30 PM, Aug 28, 2019.
・We will adjust the range at which AI adventurers use skills.
■Other Changes
・We will change the Japanese voice for when Musashi uses his Belching Dragon skill.
・We will remove the Recovery Complete pop-up after recovering insufficient stamina at the start of a quest.
・We will remove the Retry pop-up after recovering insufficient stamina when challenging a quest again.
・In Advanced Dragon Trials, we will add the day of the week to the reset text for the bonus count on the quest selection screen.
・We will remove Skill Insets from the option menu during quests in order to improve game performance.
・We will improve responsiveness to screen taps for item icons and facilities in the castle grounds.
・We will also adjust the UI on some screens.
■Issues Fixed
The following issues have been fixed in this version:
・In The Mercurial Gauntlet, the dragon sometimes fell back when the player switched adventurers after shapeshifting and using the dragon’s skill.
・Ezelith’s Flurry Debilitator +X% ability did not activate.
・With certain adventurers selected as Helper, it was possible to use force strike as the Helper adventurer by using force strike during the Helper Skill.
・In Void Zephyr Strike, certain skills would not hit when used while right next to Void Zephyr.
・Sometimes the number of times the following skills hit would be decreased while devices were performing slowly.
▼Skills
Calamitous Descent (weapon: Calamity Trigger)
Thunder’s Descent (weapon: Thunder King’s Greatspear)
Heaven’s Mistletoe (weapon: Mistilteinn)
Explosive Descent (weapon: Compass Needle)
Dragon Frostfang (adventurer: Xainfried)
The following fixes will be applied in a data update around 9:30 PM, Aug 28, 2019.
・Sometimes there was a delay when AI adventurers wielding daggers would act again after a series of consecutive attacks.
・Sometimes the AI adventurer Lucretia would not use her Empowering Triplet skill.