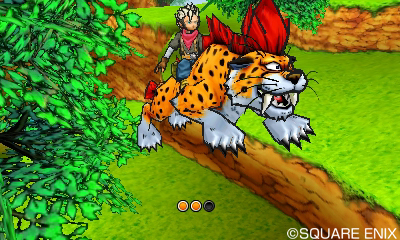 Square Enix sent out another batch of Dragon Quest Monsters: Joker 3 details and screenshots today. Find the latest content below, courtesy of Siliconera.

– Areas include castles, dungeons, icy zones, futuristic cities
– Won’t see many humans in the cities
– They say that humans are actually quite rare to see in “Break World”
– Map on the bottom screen indicates in red where you’ll need to go while in towns and out in the fields
– In Break World you won’t be able to notice everything around you by simply walking and looking
– That’s where you’ll need to use the Reactor device or ride monsters
– Reactor can help you find data on monsters
– Can also find hidden treasure chests and other objects you normally can’t see
– There will be an indication when the Reactor is responding to something
– This usually means that there’s a hidden object nearby
– Reactor reveals invisible bridges and more as well
– Use the “Ride” feature to access areas you normally can’t on foot.
– Land, sea, and sky varieties for the Rides
– The monsters will be able to provide you with help for any of the three types of travel
– As you advance through the story, the Rides also evolve
– This lets them perform new actions
– Ex: certain Rides will gain the ability to do extra jumps to reach areas you weren’t able to before
– Over 500 monsters in the game
– Use Ride with countless monsters
– They all have their unique looks for the feature
– Can attack monsters while riding
– This leads to monsters being knocked out or stunned for a short while