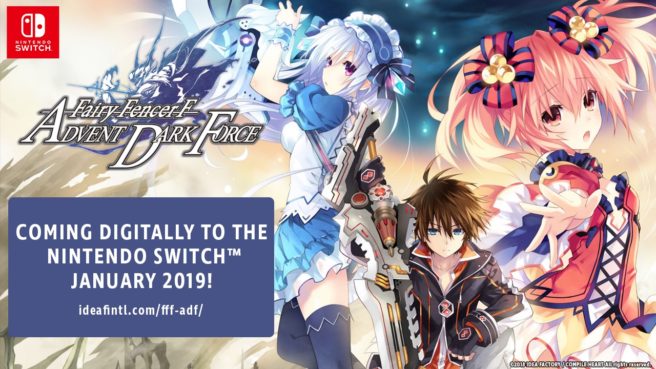 Fairy Fencer F: Advent Dark Force is coming to Switch via the eShop on January 17, Idea Factory has announced.

The Switch edition will include all 25 pieces of DLC from the original PlayStation 4 release. During its first two weeks, the game will have a 20% launch discount off the $39.99 asking price.

Continue on below for the latest Fairy Fencer F: Advent Dark Force details covering battles, along with a new batch of Switch screenshots.

Players will need to be aware and strategize the following actions you’ll need to make during battle: the Action Window, Attack, Wait, and Command. The move sets chosen will ultimately effect the overall turn order shown on the Action Window. Within the Command option, players will have five options to choose from:

– Skills/Magic – Use your SP to use special attacks, heal HP, or other command buffs to help Fang and the gang through tough battles. Note that some skills require HP to use.
– Items – Utilize items wisely to heal HP/SP, remove status effects, and revive party members that are knocked out.
– Special – Each character possesses their own Special command with unique effects. “Fang’s Serious Face” Special, increases his attack power by 1.5x, while “Pippin’s Persuade,” if successful, will make Pippin attempt to “negotiate” with the enemy and drive them away.
– Switch – This allows players to swap in reserve party members (Have up to 6 party members on the field!)
– Fairize – Once your Tension Gauge reaches a certain level, characters can Fairize, which transforms your characters into powerful beings! During their Fairize state, a character’s attack and defense becomes much stronger. Players, however, must take caution of the Tension Gauge as characters will be forced out of the Fairize state once the gauge gets too low.