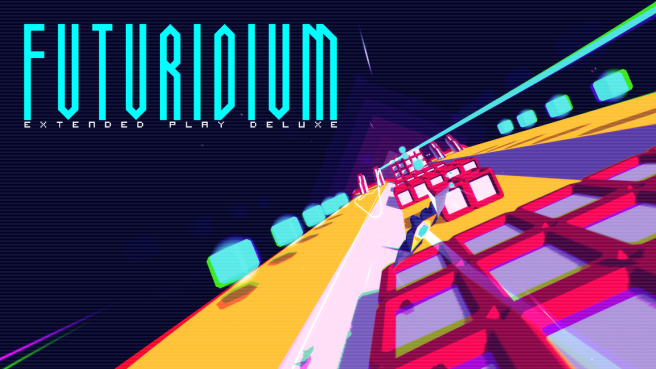 Futuridium EP Deluxe is a psychedelic retro inspired shoot’em up with a modern twist, that blends together frantic action, puzzle elements, a vibrant low poly aesthetic and an heart pumping electronic soundtrack. As a lone starship pilot lost in a dimensional loop just before a big space battle, with a limited and constantly depleting energy tank, your only hope is to fly as fast as possible over enormous space dreadnoughts, destroying their defenses and the cyan power cubes to get some energy back.

Try to escape the infinite loop of Futuridium: you can count only on your reflexes, your dual lasers, the nimbleness of your starship and… the ability to turn 180° on the spot! Can you beat all the 50 levels, the 5 bosses, unlock all the extra game modes and collect the 150 medals?

Futuridium EP Deluxe will be out “soon” on Nintendo’s systems. Both versions run at 60 frames per second, and the New 3DS version will offer 3D support.

A few screenshots from Futuridium EP Deluxe are in the gallery below.