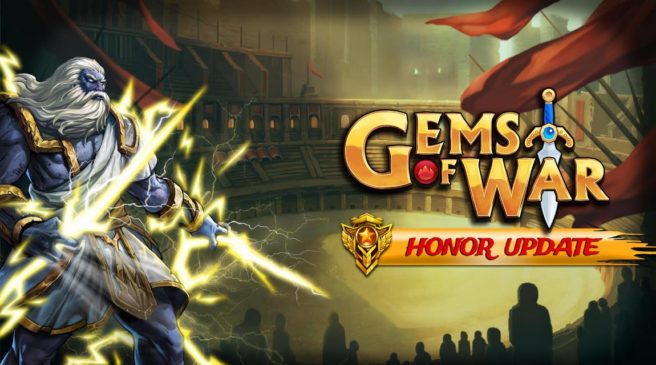 505 Games has confirmed that it is now distributing a new “Honor Update” for the Switch eShop game Gems of War. It includes a new Honor System, overhauled chat system, and more.

A new update has hit the world of Krystara, improving the quality of life for menu screens across the entire game. Changes includes a rework of the layout and overall feel of the settings menu, as well as the introduction of valuable Battle Info during puzzle battles and treasure hunts.

Honor Fellow Heroes
A new Honor System has been added, allowing players to award honor points for positive and helpful experiences in Guild, Chat and PVP.

You’re the Real MVP
The final screen in PVP has been reworked to highlight your best troop. Accolades for support and utility are also highlighted, giving attention to your team’s role players too!

Overhauled Chat System
Chat has received a new layout, designed to be more intuitive and match the rest of the game.

New Social Collectables
Portraits, emojis and titles have been added to chat. Rise in the honor ranks and participate in events to unlock more!

Additional optimizations and bug fixes round out this update.