[Let’s Talk] How are you liking Splatoon? 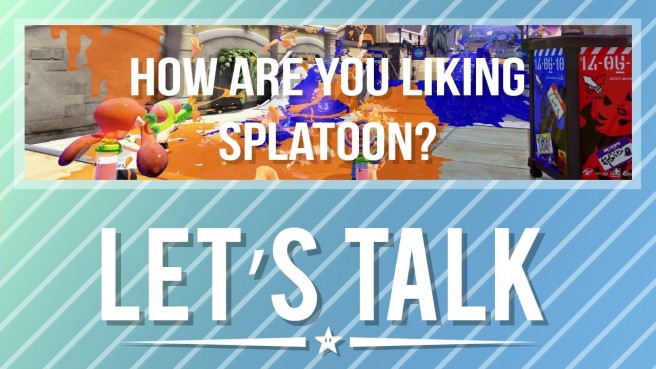 Let’s Talk #11: How are you liking Splatoon?

Splatoon launched in North America and Europe on May 29. That means it’s been out for exactly one week! Given that, I wanted this week’s Let’s Talk topic to be focused entirely on that game, as well as your impressions.

The nice thing about Splatoon is that it’ll likely be fresh in your memory for at least the next few months. Nintendo has already released new weapons and a multiplayer map even though it’s only been out for a few days. The Inkbrush just came out roughly an hour ago!

So let’s get this Splatoon train rolling. Let us know how you’re liking (or not liking!) Splatoon in the comments below. Have you had a chance to complete the single-player campaign? What do you think of the different multiplayer maps? Any thoughts you have are welcome here!

Highlights from last week’s topic: Do you prefer playing alone or with others?

I honestly like playing solo the most. Don’t get me wrong, I do love playing with my friends and family when the timing is right, but amongst those people, there are only 4 that I can think of that value video games like I do. It is with those people that I enjoy multiplayer with the most, but because I live in Japan and 3 of those 4 friends live in North America, I definitely mostly play alone, which is FINE BY ME.

For me, playing video games is a lot like reading a book. If the game is good, it usually introduces itself well, gets you immersed into the game world, and eventually sucks you in until the end. The nice thing with video games is that they don’t necessarily need a story in order to fulfill this, which is pretty awesome and unique. A game like Pushmo, which has very little story, can still suck you in with a great introduction to the game, puzzles, and world.

I also work extremely long and difficult hours, so when I have down time, I usually just sit down and play. Again, like a book, I love to be pulled away from my reality and enjoy time in a make-believe world of sorts. It’s nice to escape reality and enjoy the fantasy of what video games can offer. Escaping that reality with friends is nice, but mostly, I just like playing alone.

Both. But if I play local multiplayer, it’d have to be with people I have good chemistry with. It’s annoying when some people get competitive and childish instead of enjoying the moment of playing video games with a mate