Looking into the release date origins of Vs. Super Mario Bros. 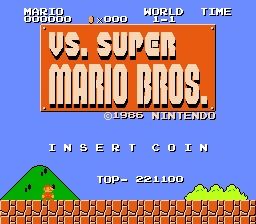 German website Nintendo-Online recently looked into the release date origins of Vs. Super Mario Bros. Here’s a summary of their findings:

? It is widely believed that Super Mario Bros. first launched in Japan on September 13th., 1985, on the Famicom. In 1985 or 1986 it was released in North America and 1987 in Europe on the NES.
? Later it was ported to arcade. This version is known as Vs. Super Mario Bros. and was launched in North America in 1986.
? But Nintendo-Online found four trustful sources claiming that Super Mario Bros. was originally released as an arcade game.
? The first source is a review SMB in a 1987 issue of the German video game magazine Happy Computer. Here, Heinrich Lenhardt – a famous German video game journalist – wrote what translates to “Arcade visitors might already know this game, that is now available in a nearly identical implementation for the Nintendo Videogame [sic]“
? In 1994 the famous video game historian Leonard Herman wrote in Phoenix: The Fall & Rise of Videogames: “[T]he home version of Super Mario Bros. looked and played exactly like its arcade counterpart.”
? The most detailed reference to an arcade machine that preceded the home console version of SMB comes from video game historian Steve L. Kent. In his 2001 book The Ultimate History of Video Games, he wrote “Super Mario Bros. did very well in Japanese arcades and attracted some attention to the failing U.S. arcade industry. By the end of the year, Nintendo engineers succeeded in creating a home version of Super Mario Bros. for the Famicom. […] Although the home version of Super Mario Bros. was not identical to the arcade game, it was an extremely close approximation.”.
? In 2009, Kent repeated the basic information in a blog entry (http://sadsamspalace.blogspot.de/2009/08/okay-now-that-i-haveofficially-looked.html) where he stresses that this mysterious arcade game is not identical to Vs. Super Mario Bros. and was released a year before the Famicom version: “[A]n arcade version of the game predates the NES version and the well-known VS version. The original arcade version shipped in 1984.”
? In 2011, Tony Mott, editor-in-chief of Edge magazine, notes in his book 1001 Video Games You Must Play Before You Die that Super Mario Bros. has been “originally an arcade game”.
? So there are four video game journalists and historians that mention such an arcade game. But it seems that until now no major website has taken note of this evidence. Nintendo-Online tried to further investigate on this matter, but unfortunately did not really succeed. Also, they tried contacting some of these authors, which was also not successful.
? Concludingly the site has to say that it is not sure what to think of these references. There is no obvious evidence for the existence of an arcade port preceded the home console version of SMB. After all, if that would be the case, we would have real proof for that. But on the other hand, it is quite unlikely that all of the four sources are based on misconceptions. So Nintendo-Online could not clarify this mystery. But at least we could point it out and could conclude that the existence of such an early arcade port is very unlikely.