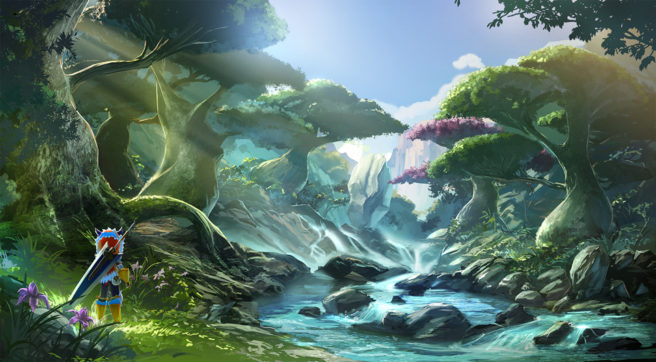 Famitsu has a big update on Monster Hunter Stories this week. The magazine reveals new characters, areas, details on equipment, and more.

Some of this information has now been reflected on the official website as well. Here are a bunch of screenshots based on the coverage:

The first page of Famitsu’s article goes over the hunter Rivelt and his felyne Popola. He is voiced by Sugita Tomokazu.

Rivelt may look lazy normally, but when he goes out to hunt, his sharp observation eyes and experience always gain him results. He likes to act alone, and is considered to be an aloof hunter by people around him.

His felyne Popola keeps his home tidy. Despite whining about its master’s laziness, it cannot abandon Rivelt because he’s a skilled hunter.

Rivelt seems to be open to the concept of riders and acknowledges the necessity of their existence. In return, the protagonist will also learn about the values of a hunter from him.

The second page reveals a new wave of Otomon for Monster Hunter Stories. Those are as follows:

– Ride Action: Jump; same as the original Zinogre.
– Bond Technique: Cross High Bolt; engulfs own body with dragon light, then leaps up high and finally charges toward the enemy like a meteor.

– Ride Action: Flying.
– Bond Technique: Shooting Star; launches countless blade scales from air, and charges towards the enemy together with the scales to cut them into nothing.

– Ride Action: Underground Movement; can be used when there is a hole on the ground. May also enable to go through under obstacles like walls.
– Bond Technique: Barroth Charge; Sticks head into the ground and runs forward. After that throws a large rock at the enemy.

In another section, Famitsu goes over characters in Girudekaran. The captain hunter Gentras cannot acknowledge the existence of riders and is always wary of the protagonist. Meanwhile, the guild master Mahho is a Wyverian who knows of the existence of riders. He’s the one who introduces the protagonist to Rivelt. We’re also given details on the guild receptionist sisters:

– The eldest is Limon, the blonde-haired easygoing lady.
– The second is Mel, the shrewd red-haired girl.
– The youngest is Mafy, the purple-haired girl who is serious but also easily gets nervous.

While Gentras detests riders, Mahho and the receptionist sisters are interested in them, and willingly help the protagonist.

Another section of Famitsu’s Monster Hunter Stories coverage is about equipment (and quests). Equipment is obtained by clearing Production Quests. Basically, each equipment has its own quest, which requires a number of materials to be collected. Once gathered, players report with the materials and money needed for production to complete the quest and obtain the equipment.

It is possible to take multiple quests at once. Also, armor will be produced in a full set. Famitsu points out that the location of monsters to obtain the materials from will be mentioned in the quest list, and unneeded materials can be stashed and exchanged with points which can also be used to create equipment once enough is gathered. Equipment can also be upgraded by gathering required amount of materials, points, and money. Lastly on the subject, it’s implied that by upgrading equipment, not only the stats will increase, but you may also have a chance of activating skills.

– Kuba Desert: Desert monsters like Cephalos live here. This place used to have many trees, but it became a desert after an environmental change.

– Albracus Village: Rivelt’s hometown village located in the Kuba Desert. It used to be flourishing as a center point for trade, but recently sandstorms have been affecting the trade route.

– Shakurd: An area of camps set up by hunters in the middle of a desert. It’s built near a cliff to prepare against monster raids. It may be also used as a resting place for people who just passed through the desert and heading to Albracus Village.

– Chief Norm: The village chief of Albracus. He meets the protagonist by chance when he is away from his village due to a certain event.

– Famal: A hunter from Albracus who is also Rivelt’s senior. She is rather cautious towards riders.

More information on Monster Hunter Stories will be published in Famitsu’s September 1 issue.