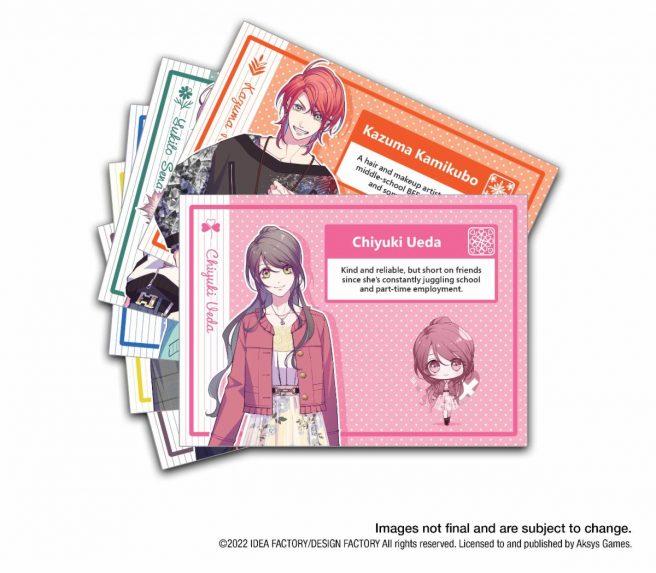 Aksys Games today confirmed a final release date for the English version of Lover Pretend. In North America and Europe, the otome title will be out on December 1, 2022.

Aksys Games also revealed a sneak peek of the exclusive set of six full-color character cards that will be included in all first run copies, pictured above. Fans who nab the game from the Aksys Store have an opportunity to add on a bonus soundtrack CD while supplies last.

Lover Pretend originally appeared as a Japanese game in March 2021. Aksys Games announced plans for localization in August of that year.

Chiyuki lives alone, spending her days busily studying at college and her nights working late as a part-timer. She has two dreams: one is to become a screenwriter, the same aspiration her mother had before she died, and the other is to find the father she’s never known. The only clue Chiyuki has is that her mother wrote a script for a popular drama series before she was born. “Maybe someone involved in the film knows something…?”

The same director is filming a new series with sons of the men who worked on that previous one as part the crew. Chiyuki joins the production as an assistant screenwriter and searches for answers as she tries her best at her new job. But as fate would have it, she is pursued by the sons involved in the production. Chiyuki tells herself she’s simply pretending and that she’s not really in love, or is she? Will Chiyuki, who knows nothing of real love, be able to write her own story?