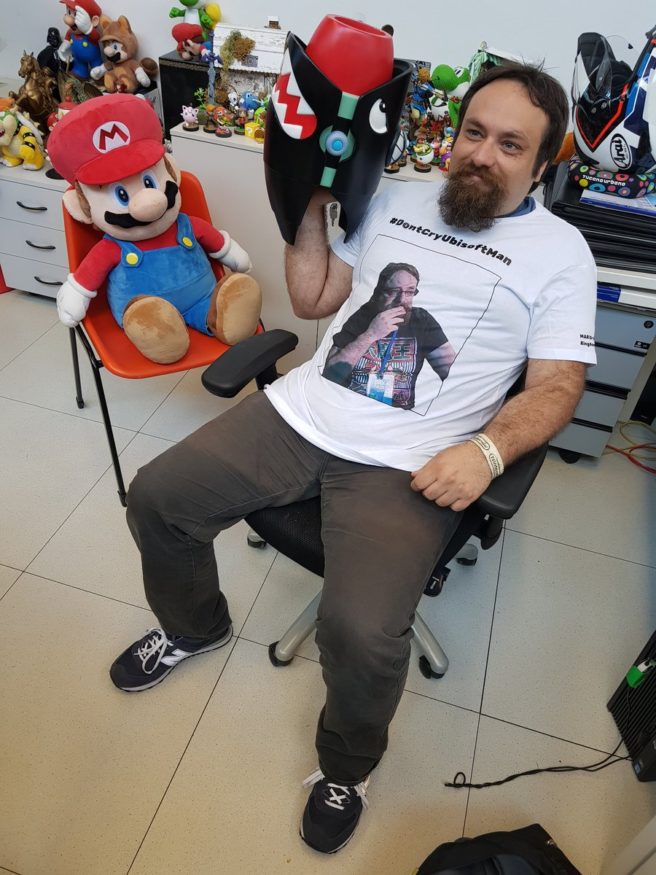 Nintendo UK has a new interview up with Mario + Rabbids Kingdom Battle developer Davide Soliani. Soliani spoke about what it was like originally pitching the idea to Nintendo, the emotional reveal at E3 last week, and more. Read on below for his various comments.

DS: The answer is the contrast. Mario is a well known hero. Rabbids are well known chaotic creatures. So we said, “If we combine the humour of that contrast and the gameplay mechanics that we can invent because of this contrast, we can bring something new.” I love the idea of the Rabbids, throughout the game, learning how to become heroes from Mario, and Mario learning how to crack a joke.

On the original pitch meeting…

DS: After we felt as a team that we had something solid, Ubisoft contacted Nintendo and said, “We want to propose the idea.” We were not expecting to meet Nintendo super soon, but the meeting was about three weeks later and we said, “Oh my God, it’s super early!”

We felt that we had to do something special for this pitch. We wanted to avoid any Powerpoint presentation or any design document that would have been boring and ineffective. So we said, “We should work like crazy and go there with a playable prototype.”

When I arrived in front of Miyamoto-san, who is the creator of the games I prefer the most, who inspired my whole career as a games designer, I felt split in two between the urgency to ask for an autograph and at the same time the responsibility to present the idea in the most professional way.

But he loved it! He said, “I’m impressed!” I was not expecting such a reaction. Then he asked me, “Where did you get the Mario and Luigi from, because they look identical to the Nintendo versions?” The truth is that we were so crazy, we wanted this game to happen so much, that even with only three weeks we recreated Mario and Luigi from scratch in order to bring the essence of those two characters to our prototype. I think that this was the moment where we convinced Nintendo of our passion and commitment.

On the emotional reveal…

DS: It’s not easy to answer you, but you can imagine the pressure on me, because I’m just part of a team. I’m the creative director, so I feel the pressure. On our shoulders was the responsibility of three years of development. Ubisoft took quite a big risk, because we decided to embark on this game without knowing what the new Nintendo console would be or if the idea would be accepted.

Also, because a few rumours started on the internet, prior to our announcement, a few people made their own assumptions about the game, but now they can play it and they have changed their minds! They’re having fun and that is the biggest reward ever.

So the conference for me was a wave of emotion that I couldn’t control, but I didn’t know that it was spreading all over the internet until I discovered it the night after. Because I was in the Nintendo booth ready to do a rehearsal for Nintendo Treehouse Live and a guy stopped me saying, “You are super famous in China, you have more than 2 million views on our website” and showed me the picture of me crying. I said, “Oh noooo!”

DS: I believe so, and I think it’s something I will never forget. I will probably create a still from that conference and frame it in my house. Because it doesn’t happen every day to have a legend on stage presenting a game you did using his characters. It’s more than honorary, it’s an occasion of a lifetime as they say.

Still today I cannot process it entirely. It’s happening but it’s so fast. I was not ready. People queued for three hours at E3 and then said they liked it even after three hours of queuing!

On inspirations for the game…

DS: The first time I met Miyamoto he told me, “I’m impressed, but please don’t make a platform game out of this.” There is Mario jumping in our game, but it is translated in our game so it’s a Team Jump, it’s different, and he loved that. That was one of the first rules, to find new ideas.

If you’re curious about what inspired us, it was multiple games to be honest. Many tactical games, but even action games and racing games. You won’t believe me, but one of our references as a team was Mario Kart. We said, “How cool could combat be if it was like Mario Kart but without the kart, on foot?” That’s why, in our game, you have weapons that do not just deal damage but can also use a super effect that applies a special behaviour to the enemies, such as burning.

So you can burn the bottom of enemies that start to run on the battleground and there is propagation, so if an enemy on fire touches another unit or even a hero they will start to run with their bottom on fire too! This is something that we call, internally, the “domino effect.” So the intention was to create a tactical game with strategic decisions but also to make it new… Very dynamic, very action-oriented.

On striking the balance between new strategy players and seasoned gamers…

DS: In our presentation we were saying, “This game should be like an onion”. The first layer is accessibility and then you peel off part of the onion and you discover there is something new to learn. But the key to learning the layer of tactical strategy is that it should go through the layer of accessibility.

Playing as Rabidd Peach for example, you might notice that she’s running on the battleground, dashing and then jumping. Later on in the game, you have access to the skill that will let you upgrade the character, so you will be able to do a Triple Dash on three different enemies and still get a Team Jump from one of your teammates, landing behind the cover, shooting. At that point, maybe your weapon will have a bounce super effect. So the enemy bounces in the air and at that point there is Mario nearby with a power called Hero Sight to shoot when it’s not even his turn of movement if an enemy is nearby. So at that point it triggers that technique, so Mario shoots, hits that enemy and maybe on his weapon there is a burn effect. So the enemy lands on the battle ground and starts to run and spread the fire. That is the domino effect we wanted…