Posted on January 1, 2018 by Brian(@NE_Brian) in General Nintendo, News 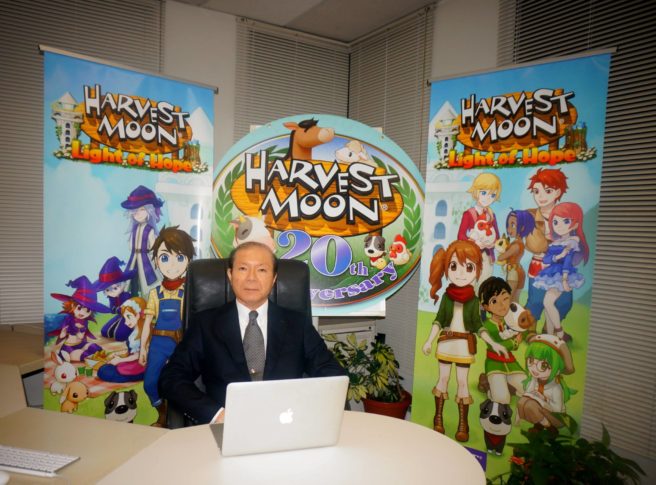 As a way of ringing in 2018, Natsume CEO Hiro Maekawa shared a message on the company’s Facebook page. He recaps the start of Harvest Moon, reconfirms Light of Hope on Switch early this year, and more. You can read the message in full below.

The year 2017 was a very special and memorable year for us.
It was the 20th Anniversary of our Harvest Moon franchise.

Taking this opportunity, I would like to share my unforgettable memory about the birth of Harvest Moon with all our loyal Harvest Moon fans.

It was 1996 when I first came across an unknown farming simulation game for the SNES. I played the game, and found it very unique and heartwarming, something I had never seen before. My instinct told me that this niche game might have great potential to grow in America, given that America is a large farming country. At the same time, I felt a sense of nostalgia about the game, since I was born and spent my childhood in the countryside of Japan.

At that time, I was a newcomer to the video game industry, and I did not know much about the U.S. video game market. So, I decided to check with my associates in the industry to see what they thought about this game. To my shock, all the comments I got were extremely negative! Basically, they said that the game was very boring, there was no excitement, and there would be no market for this type of bland game in the U.S. All the negative comments were understandable in hindsight due to the fact there was no such video game genre as “Farming Simulations” at that time.

However, it was my strong intuition that this non-violent, family-oriented game could have a big potential to resonate with fans in this country. Based on this belief, I decided to release, this game and named it Harvest Moon. And this is how Harvest Moon was born twenty years ago!

Thanks to the continued support by loyal Harvest Moon fans worldwide, this once-unknown farming simulation game has grown to be one of the best-known family-oriented franchises for gamers of all ages! We sincerely appreciate all those loyal fans for their continued support.

We have several other exciting titles coming this year in addition to Harvest Moon: Light of Hope for Switch and PlayStation 4, so please stay tuned!

Our company mission for the past 23 years has always been, and will continue to be, to “Make Everyone Happy” with exciting, interactive entertainment software for the entire family. At Natsume, “Everyone” means all of our customers, Natsume employees, and all of the people we work with, such as our development partners, our distribution partner, retailers, financial institutions, media, and all of the people who are directly or indirectly connected with Natsume and our products.

We at Natsume are committed to continuing our corporate mission to “Make Everyone Happy,” and we would appreciate your continued support.

Wishing “Everyone” a very happy, healthy, and wonderful New Year!