Nintendo on Switch sales, Animal Crossing: New Horizons has best start ever for a Switch title 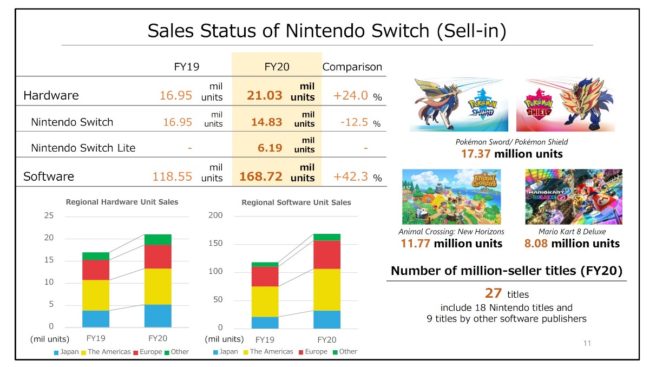 • Looking at software, Pokémon Sword and Pokémon Shield posted sales of 17.37 million units, and Animal Crossing: New Horizons sold 11.77 million units, which is now the best start ever for a Nintendo Switch title. In addition to titles like Luigiʼs Mansion 3 and Super Mario Maker 2 that were released during this fiscal year, sales also continued to grow steadily for titles released in previous fiscal years like Mario Kart 8 Deluxe, and for titles from other software publishers. The total number of million-seller titles during this fiscal year reached 27 titles, including those from other software publishers.

• As you can see by looking at sales by region, both hardware sales and software sales grew year-on-year in every region.