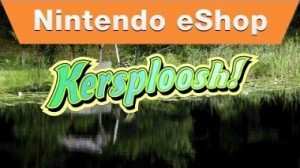 Of all the things to design a game around, the act of throwing a stone down a well be has to be pretty low on the list of good ideas, yet here we are with Poisoft’s Kersploosh, a game that takes this rather simple act and turns it into a fast-paced arcade game. Wells in Kersploosh (it’s called Splash and Crash in Europe, but Kersploosh is more fun to write) are more of an abstract representation of what the inside of a well, might look like, so there are plenty weird obstacles like cannons, pizzas and flying biscuits to avoid as you control a stone in a rush to the bottom. Kersploosh was actually a 3DS eShop launch title in Japan so over a year after its initial release and following the proliferation of plenty of other accessible, arcade-style games on the eShop, is it still worth sending your love down this well? 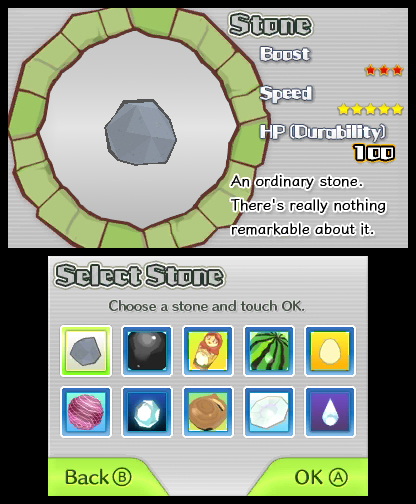 Kersploosh’s greatest strength is its simplicity. Your stone is constantly falling to the bottom of the well, and all you need to weave it through objects is the circle pad, so anyone can easily pick up and play it. However, despite the simple controls, the game can get quite challenging. It’s pretty likely that your starting stone will be smashed into tiny pieces at some point, but other, more durable playable objects are unlocked throughout the game. Kersploosh gets quite creative when it comes to the different objects; there’s a massive ball that’s durable, but it obscures most of the screen thanks to the third-person view and a drop of liquid that’s ridiculously fast and maneuverable but can only take a single hit. Some objects might move quicker or have more stamina, but everything comes at a cost. 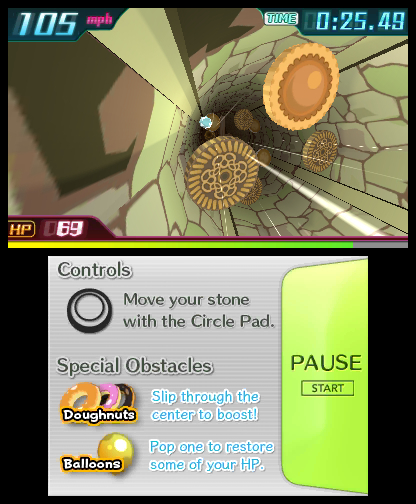 The same balancing act applies to the actual game – do you risk hitting the walls of a donut for an extra speed boost (yes, there are donuts in the well), or play it safe? The constant falling and risk/reward mechanics reminded me of Dejobaan Games’ AAAaaaAAA! A Reckless Disregard for Gravity, though instead of trying to earn a high score, Kersploosh is focused on attempting for the quickest clear time. The real challenge from the game doesn’t come from clearing all the wells (you do start off with an invincible bouncy ball, after all), but by doing so as fast as possible. The problem with this is that, because each of the game’s ten levels are designed to be completed as quickly as possible, Kersploosh ends up feeling far too short. The meat of the game is trying for the fastest clear times, but without a decent way to compare times with other players, the whole competitive aspect is lost. Clear times can be shared via Streetpass (not that I’ve actually run into anyone with this game), but Kersploosh really needed to have online leaderboards. There aren’t even any par times like Mighty Switch Force, or different awards for getting quicker clear times. 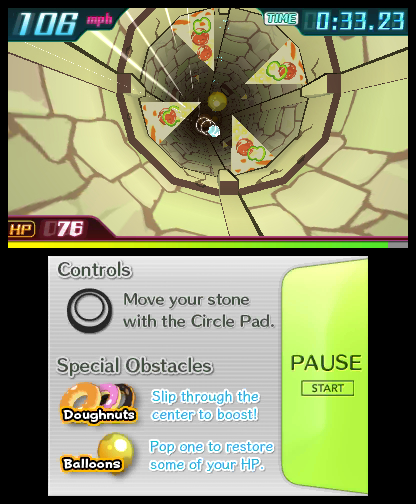 Just like the game itself, Kersploosh’s graphics are also kept fairly simple. None of the objects or locations are particularly detailed, but the simplistic style works well with the 3D effect. Kersploosh has the strongest use of 3D out of any game I’ve played on the system – a little too strong, in fact. Even on the lowest setting, whatever object is being dropped down the well is followed by speed lines that jump out from the screen and tend to obscure the action onscreen. The game has a great sense of speed even without them, so they feel like an unnecessary distraction. 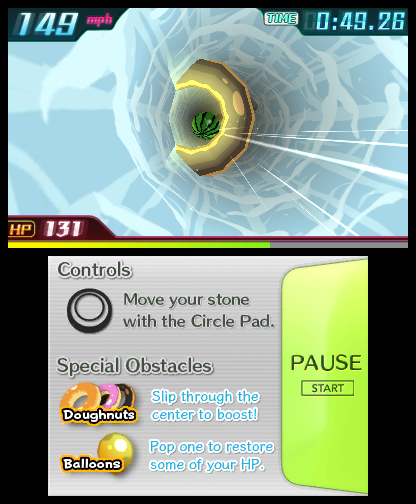 For what it’s worth, Kersploosh has much more personality than you’d expect from a game all about dropping things down wells. I doubt anyone really needed them, but each level starts off with a short (and skippable) cutscene explaining why that object was thrown down there in the first place. Aside from these little segments, the game’s presentation is a bit bare-bones. There’s not a whole lot of music aside from the boring techno piece that plays during every level in the game. It’s fun at first, but it sure wears out its welcome. That’s Kersploosh in a nutshell, really – it starts off enjoyable, but thanks to a lack of content and a crippling to make things as simple as possible, it ends up feeling far too shallow and repetitive.

The bottom line…?
Kersploosh has a certain charm to its simplicity and it’s definitely a good game to play in quick bursts, but the fact that there are only ten levels and no real reason to keep playing after you finish them means that I can’t see many players coming back to it. The game fails to really make a splash.

You’re looking for a simple, easily accessible game and you’re likely to stick around to try and compete for the best times on every stage – even if there isn’t anyone to compete with.

You’re likely to beat the game in half an hour and then quickly forget that it ever existed. It’s also probably a bad idea to play Kersploosh if you have a crippling fear of falling (or biscuits).

Throwing three dollars down a well

AAAaaaAAA! A Reckless Disregard for Gravity

Final Score: 5/10
Want to berate Patrick for including so many awful puns in this review?