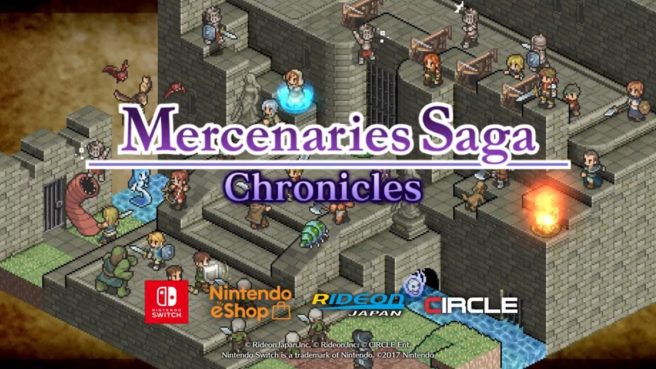 Following its initial release on the eShop in February, Mercenaries Saga Chronicles is now receiving a physical release. The new boxed version will launch this summer, PM Studios and acttil announced today.

Mercenaries Saga Chronicles features three different games that previously came out between 3DS and mobile. Additionally, some new features and elements are included on Switch. All of the games offer tactical turn-based strategy RPG gameplay.

Continue on below for additional information for Mercenaries Saga Chronicles, along with a trailer.

The Mercenaries Saga series, made up of Mercenaries Saga: Will of the White Lions, Mercenaries Saga 2: Order of the Silver Eagle, and Mercenaries Saga 3: Gray Wolves of War, offers hours of tactical RPG gaming to Nintendo Switch owners, all in one game package! Your decisions and mid-battle strategic choices will determine the fate of your squad of warriors. Your job is to cleverly move your squad across the play grid, attacking opponents as they come within range. Your effectiveness in battle is determined by character classes and equipment, which is under your complete control before heading into battle. With each victory you’ll gain experience and skill points, which you can use to level up your characters and boost their stats in preparation for the next fierce battle. Your choices both in and out of battle will determine how the story progresses and, ultimately, how it all ends!

▪Your Fate in Your Hands! – A massive campaign featuring over chapters will keep you busy for hours! But play smart – your decisions will guide story routes and endings!
▪Strength through Battle! – Success in battle allows you to upgrade your team and equipment. Master the battlefield to master the game!
▪Mana Is the Key! – You’ll slowly accrue Mana throughout each battle, which will allow you to unleash devastating attacks!
▪Get Your SRPG Fix! – 3 games in one package isn’t enough? Clear the game once to unlock more difficulty levels for limitless challenging gameplay!