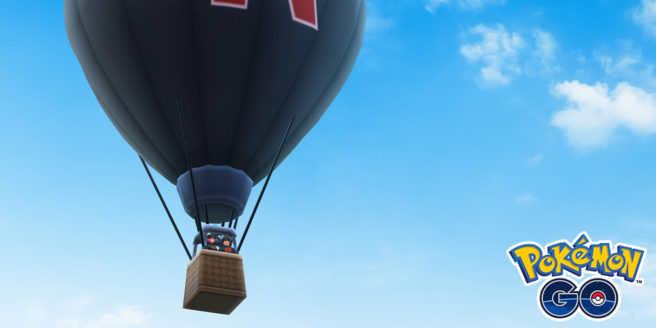 Mysterious balloons have popped up in the sky, and the culprit is Team GO Rocket! With these Team GO Rocket balloon invasions, you can now battle Team GO Rocket anywhere on the map. We ask that you keep an eye out for balloons in the sky and battle the Team GO Rocket Grunts and Leaders piloting them. Who knows – you may even find Giovanni! Reports show that they appear once every few hours, but could appear more often during takeovers.

Turns out, Professor Willow and the team leaders were on to something when they discovered those scraps of paper! With Team GO Rocket flying across the world of Pokémon GO, we’ll need as many of you as possible to help defeat them! Keep an eye out for these Rocket balloons, and continue to train. Hopefully this will be the extent of their mischief and they’ll surrender now before we have to prepare for more fights. But just in case…we might have to revisit the original plan for the GO Fest Weekly Challenge: Battle Timed Research. Stay tuned for more updates on what that Timed Research will now entail, as well as the accompanying battle-themed event.

We have a brief video promoting the Team GO Rocket balloon invasions below.