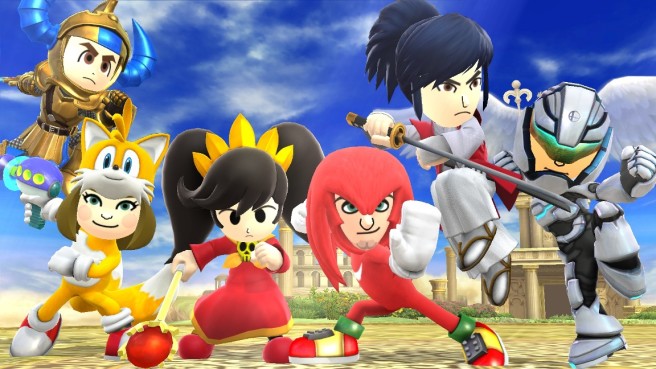 This month’s issue of Nintendo Dream has a lengthy interview with Masahiro Sakurai, director of Super Smash Bros. for Wii U/3DS. He discussed the two games in general as well as specific topics like DLC fighters.

We now have an overview regarding what Sakurai shared in terms of DLC stages and Mii Fighter outfits. For a summary of this portion of the interview, head past the break.

Three stages return from the original Smash: Dream Land, Peach’s Castle, and Hyrule Castle. The reason why they picked those are various but close to the process of elimination. Kongo Jungle was already added, not to mention that Sector Z was essentially represented as Corneria despite their sizes being different. There were only nine stages in Smash Bros. on the N64, so they had to make reasonable choices.

The old stages like Hyrule Castle look really simple when remade in HD. But if they just reuse the same textures as in the original Smash, it’s obviously going to be very blurry. Therefore they remade the textures while still keeping the nostalgic feel.

Pirate Ship from Super Smash Bros. Brawl also returns, but it’s only available for the Wii U version. This is because the 3DS version has too many limitations to be able to depict the stage.

This stage was made to commemorate the 30th anniversary of Super Mario Bros. Since it was also being made for 3DS, they had to make some limitations such as how only a few parts can be destroyed. And even though this is a Super Mario Maker stage, they still had to make it so the terrain wouldn’t be so bizarre that it becomes too difficult to fight.

They added an original arrangement on the left side of the stage by adding platforms in different elevations. The reasoning behind that is because they wanted the stage to have more strategy, especially because 2D fighting games generally have only simple long and flat stages.

The stage also has a background music change when a character receives a certain amount of damage and could be knocked out anytime. The moment for the change is calculated by the game itself. Also, as a reminder, Smash has had music changing in the past with Mushroom Kingdom when the time almost runs out.

The team didn’t have a model that could be used as a reference for making the background, so they had to make it from scratch. They also had to collect pictures by themselves, which made development hectic. In the end, they did a good job with very high accuracy.

The Midgar stage also has a characteristic specific to Final Fantasy VII, which is getting Materia and using them for Summons. But in order to incorporate them into Super Smash Bros., Sakurai and the team had to do some scheming. Considering a match lasts about two minutes in general, they had to consider how many Summons can appear. Especially for the 3DS version, since there’s a problem in loading data, they had to put restrictions to the Summons’ appearances. They also put attention on how to portray the Summons’ attacks. For example, there is Bahamut ZERO’s Tetra Flare from afar that gets closer gradually, which should look like in the original game.

Criteria on how they picked summons: their attacks, how popular they are, and how their looks and color are. So they don’t include the likes of Shiva, but instead they have a balanced roster of five Summons: Ifrit, Ramuh, Leviathan, Odin, and Bahamut ZERO. They also considered adding Fat Chocobo in the planning phase, but after much consideration (rendering the polygons, how fun it’d be, etc.), they decided not to add it in the end.

The team obtained stage data from PlatinumGames, but since it can’t be used as is in Smash, they had to remake it from scratch. For the Inspired snake, from the data they received it’s supposed to fly while keeping its torso straight, but when they checked out the actual game it was more like wriggling. So ultimately, they ended up making it behave like a sidewinder snake.

They also put a focus on Purgatorio as a characteristic of Bayonetta’s stage, where a parallel world that can’t be sensed by ordinary people exists. However, those who aren’t familiar with Bayonetta might be hard to catch this reference.