Posted on September 6, 2019 by Brian(@NE_Brian) in General Nintendo, News 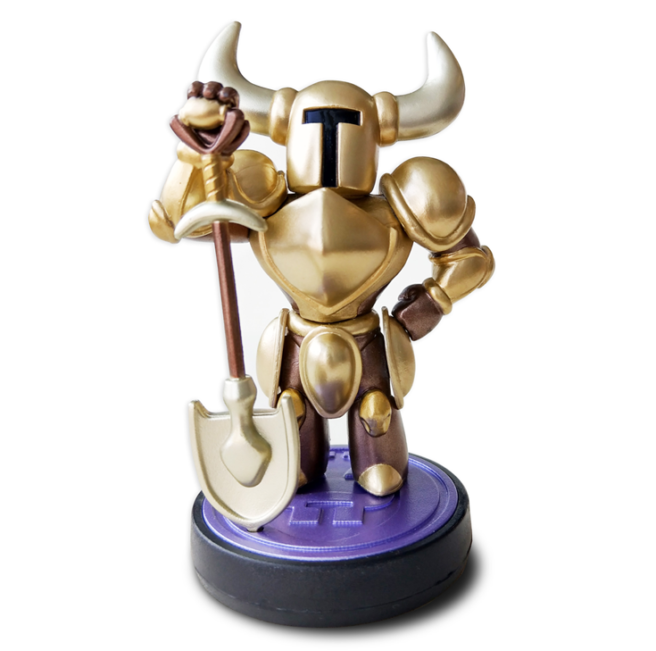 Yacht Club Games has officially announced the Shovel Knight Gold Edition amiibo. Like everything else Shovel Knight-related, it is planned for December.

Here’s what you can expect from the amiibo:

This makes it a perfect choice if you always wanted to try out these great additions but were never quite able to track down the original Shovel Knight!

Can I scan the Gold Edition amiibo through the box, like the original Shovel Knight amiibo?
No, due to requirements in packaging it is not possible to scan the amiibo contained within the Shovel Knight Gold Edition without first removing it from its container.

Will the Treasure Trove amiibo work on Switch? 3DS? Wii U?
Support for the Gold amiibo will be added to Wii U, 3DS, and Switch versions of Shovel Knight with the arrival of King of Cards and Showdown in December.

Do I need the amiibo to play co-op in Shovel of Hope?
No, co-op is available from the start on all console and PC versions of the game. No amiibo necessary. We recommend trying out a double Custom Knight co-op run if you ever get the chance!

Will you ever “reprint” the original Shovel Knight amiibo?
Since it has the same in-game features, you can effectively consider this Gold Edition as a kind of reprint of the original!

Is this a limited item?
This is not an intentionally limited item. We hope everyone who is interested can find it!

Will it be available at an online or retail store near me?
We’d recommend contacting your nearby store to ask them!

Is it really made of gold?!
Much like King Knight’s crown, Shovel Knight Gold Edition amiibo is not made of gold.

Several photos of the gold Shovel Knight amiibo can be found below.