SuperMash heading to Switch in May 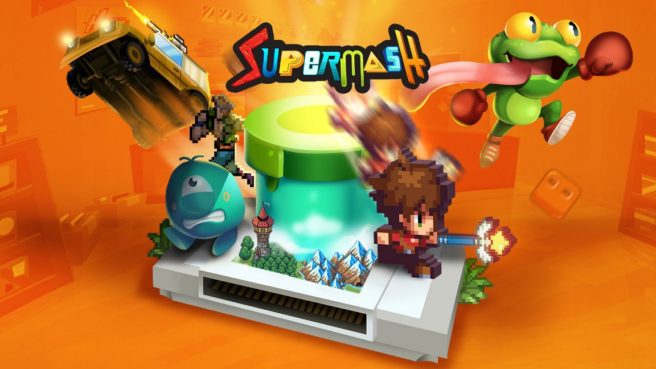 Digital Continue has dated its zany game-making game SuperMash for Switch. It’ll arrive via the eShop on May 8, the studio announced today.

SuperMash has been out on PC for several months, and since then, Digital Continue has been working on fixes and improvements. The Switch launch should come with a new tileset for the shoot ’em up genre plus a new set of JRPG characters inspired by turn-based monster-catching games.

Here’s some information about SuperMash plus a trailer:

Through positive and negative “glitches,” SuperMash creates unique and unpredictable scenarios by altering the mechanics of the Mashes the game gives you. Additionally, players can control certain elements of what they play by applying Dev Cards, which represent a generous selection of characters, enemies, environments, and more. Players can share the Mashes they find with their friends by giving them its unique playable code. The game’s story mode takes place in a video game store where players receive quests by assisting customers and stocking the shelves with the best Mashes the game can generate.

In SuperMash, players can:

Mash together six unique 2D game genres, including Metrovania, Shoot ‘em Up, Stealth, Platformer, JRPG, and Action Adventure. Each can be combined with itself or one of the other genres.

Further customize Mashes generated with collectable in-game Dev Cards, which allow them to pick and choose specific characters, enemies, worlds, and more every time they play.

Share their favorite combinations with the world through unique codes generated for each Mash.

Pricing for SuperMash is set at $19.99 on the Switch eShop.