The latest Wii U/3DS-specific UK software sales are as follows:

Atlus may have announced Persona 5 yesterday, but Nintendo fans will be most interested in Persona Q: Shadow of the Labyrinth. The new title was unexpected, but was a pleasant surprise.

“Just like the experiment of making a fighting game based off the Persona series in Persona 4 Arena, which was also well received by fans, the plan of making Persona Q came from wanting a game that could bring further joy from an even more ‘unexpected element’. This will be the first title the Persona team will be making for Nintendo 3DS, and we also have Etrian Odyssey that represents Atlus for the 3DS, and we’ll be using its system as part of a ‘festive’ collaboration mindset in the development for Persona Q.”

“While we are implementing Etrian Odyssey’s system into it, just as the name implies, Persona Q will be a completely new title, but first and foremost, it’ll be for the fans of the Persona series. However, since next year will be the 25th anniversary of the Atlus brand, we’d also like to use this opportunity to spread the essence from other titles apart from the Persona titles.”

Posted on 6 years ago by Brian(@NE_Brian) in 3DS, Screenshots, Wii U | 0 comments

The new title, developed by TT Games, is based on the first two films of The Hobbit Trilogy – The Hobbit: An Unexpected Journey and the upcoming The Hobbit: Desolation of Smaug. Players will venture on quests throughout Middle-earth, joining Bilbo Baggins, Gandalf the Grey, and Thorin Oakenshield and Company in their adventures toward the Dwarven Kingdom of Erebor.

Playable characters include Bilbo, Gandalf, and all of the Dwarves: Thorin, Fíli, Kíli, Óin, Glóin, Dwalin, Balin Bifur, Bofur, Bombur, Dori, Nori and Ori. Each comes with his own special ability, such as Bombur’s trampoline that enables his companions to “belly-bounce” out of danger.

Various locations are included in LEGO The Hobbit, such as Bag End, Bilbo’s Hobbit-hole in Hobbiton, High Pass over The Misty Mountains, Goblin-town, Mirkwood and Rivendell.

Players will encounter various puzzles, partake in Treasure Quests, and battle with Orcs, Trolls and fouler things. The game will also allow users to mine for gems, discover loot from enemies, and craft powerful magical items or build immense new LEGO structures.

Posted on 6 years ago by Brian(@NE_Brian) in 3DS, Screenshots | 3 Comments 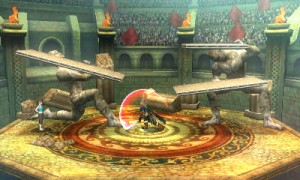 I see some familiar faces.

END_OF_DOCUMENT_TOKEN_TO_BE_REPLACED

Posted on 6 years ago by Brian(@NE_Brian) in 3DS, Screenshots | 5 Comments

Amazon Japan has posted several new screenshots of Kirby Triple Deluxe. We have a better look at the game’s boxart, too. You can find the full set above.

Posted on 6 years ago by Brian(@NE_Brian) in News, Wii U eShop | 3 Comments

Shin’en casually announced FAST Racing Neo a few weeks ago. Soon after, the game dropped off the radar.

Neo’s announcement came without any sort of information or media. This begs the question: when will we actually see something pertaining to the game?

Unfortunately, Shin’en intends to keep us waiting a bit longer. The studio will be sharing content starting next year.

In 2014. We currently optimize the local multiplayer part and it seems as we can go far beyond what we have done previously.