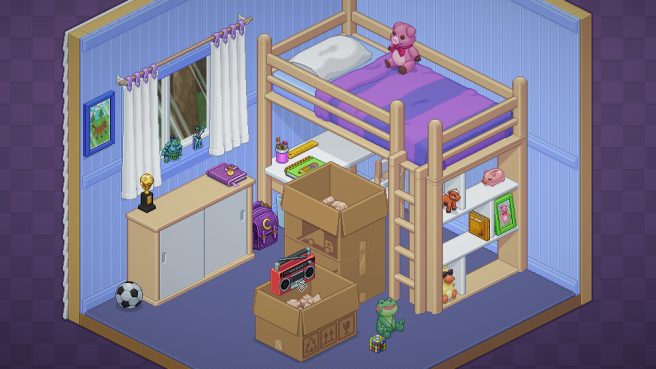 Learn more about Unpacking with the following overview:

Unpacking is a zen puzzle game about the familiar experience of pulling possessions out of boxes and fitting them into a new home. Part “item Tetris”, part home decoration, you are invited to create a satisfying living space while learning clues about the life you’re unpacking. Over the course of eight house moves, you are given a chance to experience a sense of intimacy with a character you never see and a story you’re never told.

– Unpack a home — from a single bedroom to an entire house
– Meditative gameplay with no timers, meters or score
– Explore domestic environments with all their nooks and crannies while you stack plates, hang towels, and arrange bookshelves
– Discover a character’s story through the items that come with her to each new home (and the items that get left behind)
– Soundtrack by BAFTA award-winning composer and audio director Jeff van Dyck

Humble Games published a new trailer for Unpacking to go along with the release date news. You can see it below.

Unpacking will be sold digitally for Switch via the eShop. The official website is live here.