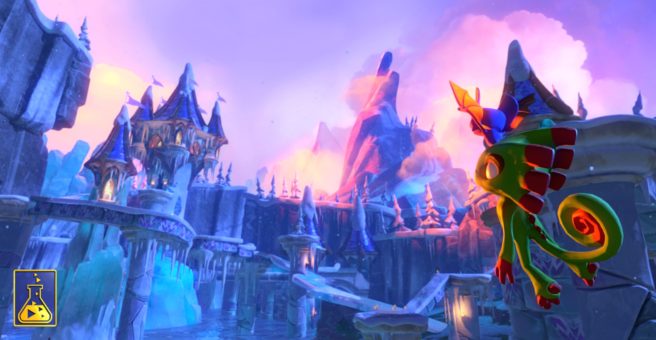 Playtonic has started its big blowout of Yooka-Laylee today. New content about the game is being unveiled, and even more updates will be shared over the next few weeks. The team is also “getting close” to settling on some launch news.

Read on below for today’s update covering topics like the story, collectibles, and a Toybox demo for Kickstarter backers due out in July. There are new images sprinkled throughout as well.

Over the past year the Playtonic team has tripled in size, moved office and quietly slaved away on what would become the final form of Yooka-Laylee. You can see some of the results of our work below and over on the Yooka-Laylee game page.

There’s lots to talk about – and today is just the preliminary act. Over the next few weeks we’ll hope to wow you with increasingly dazzling dance numbers, first clicking our heels in the new Edge Magazine on May 26, which will be packed full of details and purchasable in both print and digital flavours.

Soon after you’ll see eyes-on reports of the final Yooka-Laylee appear on your favourite online channels and video platforms, quickly followed by the hijinks of the Electronic Entertainment Expo. We will of course ensure that Kickstarter backers are kept fully up to date with everything we reveal going forward.

One thing we’re not quite ready to reveal yet is the game’s final, day-and-date release plan, but we’re getting close. The Playtonic team is working towards the same release window penned last year, but as fans of some of our past work will attest, we’re a group committed to releasing games only when they’re polished, complete and at the quality level you expect. As soon as we’re confident we’ve ticked all of those boxes, we’ll inform our backers directly of when to mark their calendars.

So without further ado, this is what Yooka-Laylee looks like today.

“A FLURRY OF EXCITEMENT FILLED THE FACTORY FLOOR. EVERYONE HAD ASSEMBLED, FROM THE TOP-TIER BOSS CHARACTERS TO THE TEA MINION FROM SECTOR C. IT WAS FINALLY HERE; TAKEOVER DAY.

“THE INGENIOUS TECH FIRM QUACK CORP HAD BEEN SUBJECT TO A HOSTILE SWOOP BY DIABOLICAL PUBLISHING CORPORATION IN HIVORY TOWERS. TOGETHER THEY WERE ABOUT TO LAUNCH THEIR MOST DEVIOUS SCHEME YET, ALL UNDER THE LEADERSHIP OF CUNNING BUZZNESS EXECUTIVE CAPITAL B!”

Yooka and Laylee’s adventure will take them deep inside the work halls of a baneful business, as the buddy-duo seek out the magical Pagies required to explore the mysterious Grand Tomes. The dexterous pair will seek to unlock the ancient secrets of these bewitching books, as they battle to thwart corporate creep Capital B and his devious scheme to absorb all of the world’s literature… and convert them into pure profit.

Our ambition with Yooka-Laylee is to create a story and cast of characters that will live on as part of future Playtonic Games, so you can be sure there will be plenty of secrets, back stories and punch lines to discover when you join the Lizard and Bat on their epic adventure.

Yooka-Laylee will introduce a roster of shiny collectibles with gameplay progression at their core (as well as other, more valuable materials). Tasty Butterfly Energy will refill the player’s health and the brand new power meter, which is designed to empower fun and challenging platforming gameplay while avoiding the all-too-occasional tedium of resource management.

In their adventure through Capital B’s corporate lair, Yooka and Laylee will explore land, air and sea in search of Pagies and their power to unlock – and expand – the magical Grand Tomes held captive in Hivory Towers.

Using the hundreds of collectible Quills discovered during their travels, the buddy-duo will purchase and unlock moves from the serpent salesman Trowzer, which they can choose to do in virtually any order that the player decides. This is just one way which Yooka-Laylee empowers player choice, in addition to the ability to expand and make larger the worlds you’ve already explored, and the unique Tonic gameplay modifiers which can be used to customise your play style.

Look out for much more on the collectibles of Yooka-Laylee in upcoming media previews.

A CAST TO LAST

Throughout their adventure Yooka and Laylee will meet (or beat) a huge cast of memorable characters brought to life by the art and audio teams behind legendary platform games.

This month we’ll be discussing a pair of new supporting characters destined to join the Playtonic Universe; the hapless, multi-limbed scientist Dr. Puzz and her traitorous former colleague Dr. Quack.

The latter is a ruthless, exosuit-wearing fowl, who’s making the best of a bad situation under the corporate rule of Capital B. The good doctor wasn’t always this unpleasant, but the ruthless takeover of his Quack Corp organisation has persuaded Quack to concoct all manner of crude inventions to satisfy the demands of his new boss – and the shareholders, of course.

Quack’s sweet, naeve prodigy, Dr. Puzz proved far more morally rigid than her former colleague, breaking ties with Quack Corp as soon as the exosuits started stirring – and taking her own inventions with her. The tentacled technician – designed by Ed ‘Mumbo Jumbo’ Bryan – is the gateway to all of Yooka-Laylee’s wild and wonderful transformations, which we’ll be revealing in the near future.

The wait is almost over… the Toybox is coming – and we’re happy to finally confirm that the standalone gameplay experience will be available in July for Kickstarter backers who opted for appropriate tiers.

So why has it taken so long? Quite simply, our plans for the Toybox have expanded beyond the web-based, single-room play thing we originally planned and it’s now a much more significant chunk of playable content.

As promised in our Kickstarter campaign, the Toybox isn’t a traditional ‘demo’, but a self-contained, spoiler-free sandbox designed to give Yooka-Laylee backers a taste of the platforming to come in the final game.There are plenty moves to try, custom-built props to play with, secrets to discover and yes, shiny collectibles to hunt out.

We appreciate your patience and hope you agree the wait was worthwhile when you’re jumping around in our sandbox in a number of weeks’ time.