Writer and podcast crew-member Jack takes on the latest entry in one of his favorite indie game series’– but can Runner2 stand tall on the shoulders of its beloved predecessors?

Upon commencement of the critically acclaimed BIT.TRIP series, Santa Cruz-based developer ‘Gaijin Games’– formerly a simple and passionate three-man group freely designing titles emulating the Atari games they loved– was rife with change. In addition to lead programmer and co-founding member Chris Osborn’s departure to form TRACER, in an extremely swift, savvy, and hostile move, Gaijin CEO Alex Neuse went on a “company acquisition rampage” and absorbed small-time developer ‘Robotube’ in an effort to branch out and emulate large-scale publishers such as Activision and Electronic Arts, more than doubling the amount of staff.

Gaijin’s first post-acquisition move was the announcement of a sequel to perhaps the most accessible game in the slightly niche-audience BIT.TRIP canon in BIT.TRIP RUNNER, a fluid, seamless, and addicting rhythm game ingeniously masquerading as an on-rails platformer (you can read my review of the original here). Early game screenshots indicated the sequel, officially named Bit.Trip Presents Runner2: Future Legend of Rhythm Alien, would be comprised of a completely different aesthetic than what we’d come to expect from BIT.TRIP, capturing more of a mainstream indie vibe as opposed to a modern take on Atari games. Would Runner2 expand upon the seedlings the first Runner game planted and blossom into a successful sequel, or would the ruthless, downright blasphemous moves Alex Neuse made as a businessperson osmose into the game and make it cave-in from sheer shallowness?

It’s the first one. 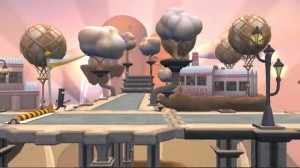 After clicking start, we hear a familiar voice… is that Robert Pollard? No, it’s Charles Martinet, the voice of Mario; what a coup! After listening to him narrate the thankfully-short accompanying narrative, we find his vocal talents a sampler of the absolutely incredible marginal production value gains Runner2 has over every previous Gaijin Games effort. While the extreme polish not normally found in direct-download indie games certainly clashes with the lo-fi, one-person design voice of the earlier games, get off your high horse; it’s awesome to see an indie game developer come this far.

Once we start the main game, we also find the gameplay absolutely filled to the brim with content normally associated with major studios backed by fortresses of fiscal support; though on-rails platformers are generally speaking repetitive in nature, Runner2 being no exception, Gaijin found ways to keep it humming along through its five worlds and ~eighty-five levels in incredibly diverse ways. There’s the staggering amount of bonus content– featuring levels with forked exits a la Super Mario World and bonus retro stages only unlocked via advancing through the correct path in branching level segments– there’s the staggering amount of modern gameplay features– such as unlockable characters and outfits, achievements, a world map, optional checkpoints, three difficulties, and a worldwide leaderboard– and there’s the staggeringly good job of staggering the power-ups one gets while traversing the campaign, introducing new abilities all the way through the fourth world.

The new, modern stylings aren’t always great, however; at times, the intricate, moving parts-backgrounds were distracting in tandem with gameplay, which led to very, very minor frustration at times. Despite that minor flaw, Gaijin really outdid themselves, and my expectations, with the cornucopia of modern amenities present. 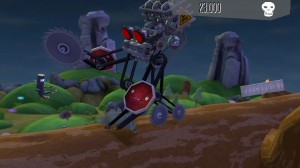 While gameplay in large remains as streamlined and enamoring as the first, Runner2 really changes the nuances of the dynamics of the series in two ways: stimulating even more level-backtracking than in RUNNER, and emphasizing high scores and leaderboards by introducing more variables into scoring, the latter ironically bringing Runner2 closer in gameplay to the Atari games the BIT.TRIP series was wishing to emulate.

There’s a geometric amount more to collect in this iteration of the Runner series, which is awesome in terms of the sheer time you’ll spend with the game (the initial playthrough was about five hours; I’d minimum quadruple or even quintuple that value were you to wish to collect everything), but it also aided in making game’s natural crescendo towards the final boss somewhat lacking, something the first game did brilliantly.

On a higher note, the introduction of the simple, single-button dance move that allows you to score points whenever you’re not clearing obstacles changes the gameplay dramatically for the better; not only does it present the opportunity to be constantly stimulated by allowing you to be, at minimum, pressing a button for each beat in the barebones electronica song you’re building, but it– in tandem with Gaijin’s decision to flash worldwide leaderboards before the start of each level– makes you constantly think about increasing your high score as much as possible. Not only is the fluid, organic crescendo in gameplay as you race towards the exit I spoke of in my review of RUNNER further enhanced, but Runner2 did a great job of making me, someone who cares not for high scores at all, try to greedily squeeze in as many dances as possible before each obstacle. 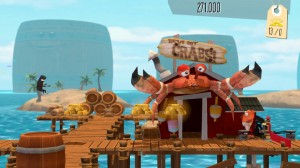 The bottom line…?
In a surprising feat of design, Gaijin Games managed to increase production values of the Runner series tenfold and introduce Refrigerator Perry-sized amounts of content and replayability, all while capturing that BIT.TRIP essence of simplicity. I think it’s time we stopped lumping Gaijin into the “indie game dev” category, and lump them instead into the “Real Deal Holyfield” category of game developers. I strongly look forward to what the studio offers up next.
Buy this game if…

Since it’s the best in its incredibly small genre, it’s tough to say, but I will say it doesn’t capture some elements contemporary pseudo-retro platformers did excellently, such as the beauty in Mighty Switch Force‘s soundtrack, or the sense of adventure in VVVVVV.