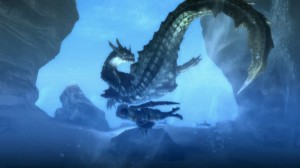 I really don’t understand Monster Hunter Tri at all. Everything that makes logical sense about the game says that it should not be good: The controls are archaic, 80% of it is grinding, the single player has a lackluster story, it’s unbearably frustrating, and it sucks up hours upon hours of your time to make any sort of significant progress in the game. Regardless, I have fallen so far in love with the game that I have spent all of my spare time playing it. I didn’t have a feature up yesterday. Any idea why? Yes, it was Monster Hunter’s fault. When I’m that addicted to a game, usually I can track the reasons why I love it. Zelda games, for instance, have fantastic gameplay, great atmosphere, and awesome level design. But Monster Hunter doesn’t have very much going for it, yet, for some reason I can tell it is going to be a game I clock well over 100 hours into. It really is the greatest bad game I have ever played.

The first thing that stands out about Monster Hunter Tri is how difficult it is to control. Many of the issues with the camera in previous games were remedied with the release of the (wonderful) classic controller pro, but overall it’s hard to argue that it is an easy to control title. I’m fairly certain that this difficulty in control was deliberate, because it makes the game incredibly difficult which is a stand-out feature of the title, but going by the standard idea of “good control”, Monster Hunter is not what you’d put on the positive end of the spectrum. When you first get a hold on the game, you’ll swing a great sword and miss about half the time because of how slow and lumbering it is, and each time you miss you become incredibly open to attack. This makes the game take a very precise, very mistake-free amount of skill to be good at, because once you miss once you could very well be hit by one attack which leaves you open for another attack and eventually death.

When someone asks me why I’m not a huge fan of RPG titles (yes, I don’t really like them too much), I give them three reasons: The obnoxious random battles, all of the stat tracking, and the ridiculous amount of grinding there is. The latter of these reasons is, oddly enough, the biggest aspect of the Monster Hunter series and probably the thing you do most often in the game. Most of the time, you go around grinding against monsters simply because you want to get that next piece of armor, intending to use it against the big upcoming battle against some huge dragon or underwater beast. It’s one of the most satisfying things to do in a game I’ve ever played, even though I hate it in darn near every other game I’ve had to do it in. 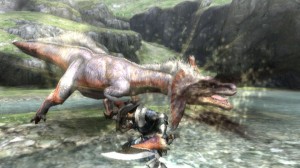 This is what I do to developers that make me grind. Usually.

Another thing that I general despise in video games is stat tracking, and having to deal with all of the nitty gritty details and numbers of armor and weapons. This is another thing that is entirely what Monster Hunter Tri is about. I have no idea what it is about the game, but it really should be a game that I completely hate, yet love more than most games I’ve played in recent months. I’m enthralled by the depth of the weapon and armor forging system, and I’ve barely unlocked any of the possible armor combinations and weapon upgrades. It’s so much to pay attention to, yet none of it strikes me as boring by any means, which is a ridiculous rarity for me, as I tend to get bored very often with numbers and stat tracking.

Monster Hunter Tri is a rare, rare game for me. It’s one that is completely opposite of the sort of things I enjoy in games, yet I spent 6 hours straight playing it online last night, and I’ve clocked 50 hours into the game with ease. Time simply flies when you play it, and more than anything I spend my time laughing and just plain having fun while I play it which I suppose is the real reason anyone plays games at all! It does call into question to effectiveness of the modern review system, though. If we go by all of the measurable aspects of a game, Monster Hunter should rate pretty low, but it really is a game that’s much, much, much more than the sum of its parts, so how do we use the review system to rate such games? I’m not sure, but that’s an issue best left to another feature on another week.