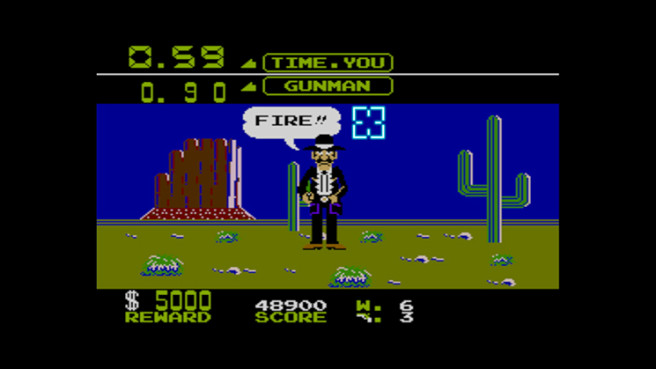 Three new Virtual Console games are heading to the North American Wii U Virtual Console this week. Wild Gunman, Hogan’s Alley, and The Adventures of Bayou Billy are arriving tomorrow for $4.99 each.

Here’s an overview of Wild Gunman:

“Go back in time or relive it in today’s future with the classic Wild West shoot-out of Wild Gunman! Keep your hand steady on the Wii Remote, and get the outlaw before he gets you. If you think you can win the battle against one outlaw, try winning against all of his friends.”

“Use your split-second reflexes and sharpshooting accuracy in the practice shooting range! In Game A and Game B modes, aim and shoot at the gang members as they turn, while avoiding the innocent bystanders. In Game C mode, shoot the cans and keep them in the air until they reach the platforms.”

Lastly, The Adventures of Bayou Billy:

“Godfather Gordon has stolen sweet Annabelle Lane off to his estate. But Bayou Billy won’t rest until his girlfriend is back home safe—even if he has to wrestle crocodiles, beat up Gordon’s goons, and endure a drive-by shoot-out! Try playing shoot-out scenes with the Wii Remote in Game A mode.”