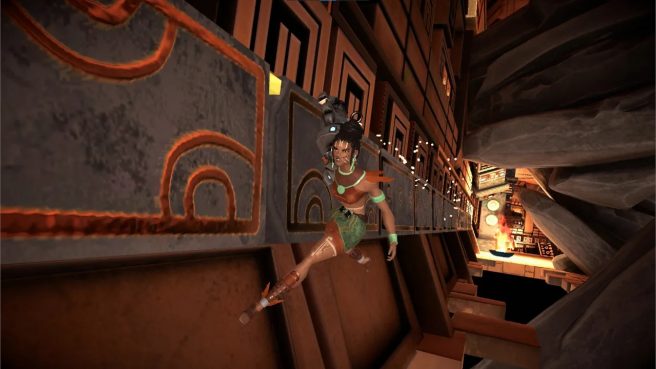 Liezo has shared the following details and trailer:

In Aztech’s alternate history, European powers never arrived on the shores of ancient Mesoamerica. The Aztec Empire’s capital Tenochtitlan has thrived for centuries as a stone metropolis, technologically advanced yet heavily rooted in the ways of those indigenous to the land. Yet the gods of their past, like the feathered serpent deity Quetzalcoatl or Mictlantechutli, Lord of the Underworld, faded into distant memories. Until now.

Soon-to-be heroine Achtli joins her archeologist mother Nantsin on an unsanctioned dig. While searching for ancient knowledge that could help all of society, they inadvertently cause an explosion and awaken stone colossi hellbent on destroying the city. Achtli crawls out of the rubble to discover two new things: her prosthetic arm’s been replaced with a stone artifact, and there’s someone in her head named Tez claiming his own divinity.

Join the unlikely duo on their quest to crush colossi and discover why the gods disappeared so long ago. Battle massive bosses while wielding Achtli’s new gauntlet as a makeshift jetpack and devastating weapon all in one. Soar through the sky, run on walls, grind on rails, and bring the pantheon to their knees with stone-crushing strikes. Upgrade the gauntlet with Nantsin’s help to earn new abilities from plasma-based projectiles to energy shields.

Aztech Forgotten Gods is due out on Switch this fall.