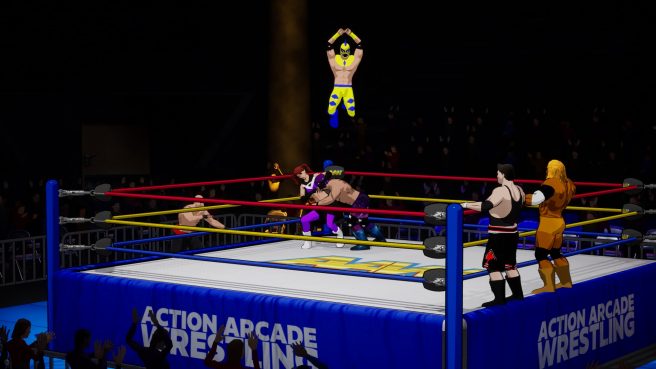 VICO Game Studio and Reverb Triple XP have announced that they’re bringing Action Arcade Wrestling to Switch. A release is planned for this spring.

Here’s an overview of Action Arcade Wrestling, along with a trailer:

Perform a BODY SLAM, knock’em down with a CLOTHESLINE, pull off the classic PILEDRIVER AND… shoot LIGHTNING BOLTS into your opponent’s face?! Whatever you do… don’t find yourself looking up at the lights!

Action Arcade Wrestling brings everything you love from 90’s wrestling games with its own twist of chaos and fun. Join the action and step through the ropes in this fast-paced, arcade wrestling extravaganza to superkick the overly simulated wrestling games out of the ring! Choose from a roster of 30+ outrageous wrestlers executing their powerful attacks and superhero-like abilities in the most over-the-top wrestling game ever conceived.

If that isn’t enough crazy for you, jump into the AAW Wrestle Lab to create your ultimate wrestler. The Wrestle Lab provides an unprecedented amount of creation tools where gamers can unleash their creativity. Whether it’s your favorite superhero or most feared monster, the Wrestle Lab is only limited by your imagination.

A Match for Every Style – Over 25 playable game modes are planned including One vs. One, Tag Team, Three-way match, Four-way match, 4-10 Person Elimination matches, Tornado Tag, Battle Royal, Trios and more!
Roster of Extraordinary Wrestlers – Choose from 30+ unique, superhero-like wrestlers that you won’t find anywhere else!

Animated Madness – Over 700 hand-crafted animations to perfectly capture the movement and antics that make AAW unique to the wrestling world.

Action Arcade Wrestling will be sold digitally for Switch via the eShop.