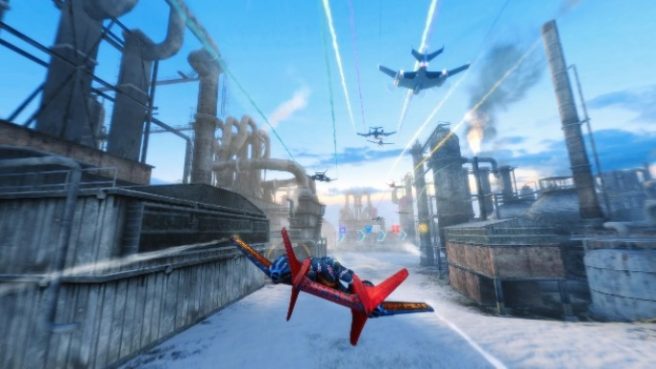 The action-packed arcade game Skydrift Infinity will release on Switch this month, HandyGames and Digital Reality announced today. A release is planned for July 27.

Get closer than ever before to the world of adrenaline-pumping sky-racing where flyboys can test and master their flying and combat skills against the deadliest opponents!

Admire amazingly detailed terrains. Choose state-of-the-art planes, personalize them with unique racing skins, and fight. Let off a sharp burst and then turn away, roll over, spin ’round to come in behind your opponents – move to their blindsides and fire again!

• Six Power-ups! Capture up to two different powers in your plane’s arsenal, then collect upgrades to increase the strength of those existing powers. Strategy becomes key as you must choose which powers to keep, which ones to upgrade, and which ones to convert into Boost energy

• 8-person Multiplayer: Take your friends down online in a fast and furious battle.

• Three Unique Game Modes: Power Race Mode is high-speed racing paired with power-ups; Speed Race Mode where players navigate the course through ring targets that accelerate plane speed and Survival Mode where pilots race against the countdown clock and each other.

Skydrift Infinity will cost $14.99 on the Switch eShop.