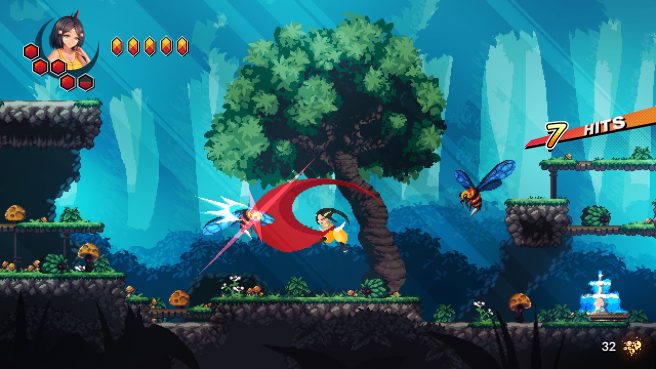 HypeTrain Digital and TeamNora Games are teaming up on DeathStick, a new action-platformer in the works for Switch and other formats. A release is planned for Q3 2022.

We have the following overview and trailer for DeathStick:

DeathStick is a beautiful 2D pixel art metroidvania/slasher platformer, where you follow a young girl Mako that starts an enthralling journey to save her world from destruction.

The ancient God has been dormant for many ages. All this time, two dimensions of the magical world of Aarkalia co-existed in balance. But one day, everything will change – the endless power of ancient God will be brought upon the Aarkalia to turn it into ashes.

Only the young girl Mako can stop the dark ritual from happening. Embark on this fascinating adventure, uncover its mysteries and help Mako discover her true destiny!

DeathStick has a unique world-switching mechanic: a World Warp ability turns the special in-game areas 180 degrees, transfers the protagonist into another dimension and unlocks new locations.

Apart from the world-switching mechanic that helps players to navigate through the in-game world, great emphasis in DeathStick is placed on combat. The core element of the combat system are various combos. The hero can fight enemies on the ground, toss them up and continue to battle in mid-air. Equipped with a quarterstaff and a hand fan Mako can perform melee and ranged style attacks, providing players with space for experiments.

Fight like an assassin! Slasher fighting mechanics with combos.

Don’t get lost! Explore the world of Aarkalia in two different dimensions.

Defend against evil forces! Challenge dozens of unique enemies and furious bosses through your adventure.

Become a master! Evolve and change your playstyle by obtaining a wide range of unique abilities and special attacks.

Look into it! Charming pixel-art aesthetics combined with smooth animations.

Find your path! Solve the mystery of the Great Mirror through multiple endings.