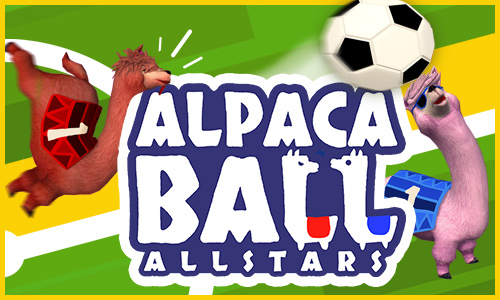 Salt Castle Studio have just revealed their new physics-based party game, Alpaca Ball: Allstars. The game is expected to launch on the Switch eShop later this year. Check out a brief overview and reveal trailer below.

Football with Alpacas! Bring the cup home with up to 8 players in this hilarious and chaotic physics-based party game! Peru-ve yourself on the Picchu and win those Machus!

Dress your silly alpaca up, swing your long neck to hit the ball, then dash after it on your tiny legs. A heady mix of unpredictable randomness, player skill and silly physics allows for comically gripping matches

– Physics-based engine for unpredictable and hilarious results!
– Frenetic local multiplayer with up to 8 other people
– Play online with your friends via Steam Remote Play, they don’t even need to own the game! (This feature is exclusive to the Steam version of the game)
– Lead your alpaca to glory in Career Mode
– Or build custom matches with bot alpacas!
– Vibrant pitches inspired by famous South American places such as Machu Picchu!
– Customize your Alpaca!