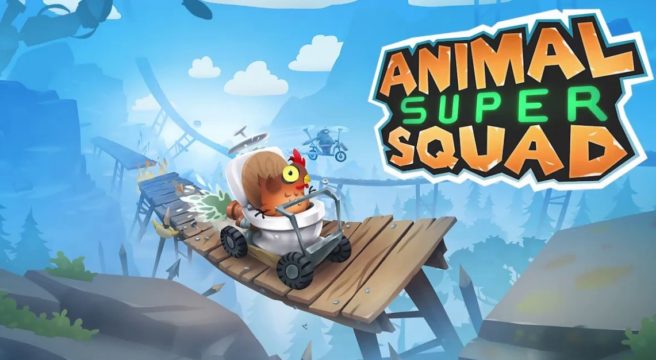 Back in 2016, Goat Simulator developer Armin Ibrisagic announced a partnership with Revelmode, a media company formed by popular YouTuber PewDiePie. The initial result of that was Animal Super Squad, which first launched towards the end of last year.

DoubleMoose Games’ website has since updated and confirms an upcoming release on Switch. In a new video published a few hours ago, PewDiePie also indicated in a roundabout way that a Switch version will be happening.

Animal Super Squad is all about getting to the other side of levels in different vehicles, though that’s easier said than done thanks to the unique physics. With a community-driven level editor, the game promises “endless replayability”.

For more information and a trailer pulled from the Steam listing, continue on below.

Animal Super Squad is a new and creative game where a big part of the gameplay is created and shared by the community. Players can create their own maps, upvote the best maps, and once a week, have a chance at being featured in the Weekly Spotlight. All gameplay assets used by the developers of the game are available for the players to use in the level editor, consisting of hundreds of assets and easy-to-use scripts. However, if you just want to play other people’s maps instead of creating your own, that’s perfectly fine too, we won’t judge you, everyone’s welcome here buddy.

Naturally, you can play the developer-made Adventure Mode as well, which feature a smooth learning curve in the beginning, and frustratingly impossible levels in the end.

Feature list:
– Play as your favorite animal
– As long as your favorite animal is either a chicken, a fish, or a sloth
– Choose from a variety of vehicles
– Each with different controls, don’t worry, you’ll figure them out along the way
– Get to the other side of the level to win
– You know how this works, you’ve played games before, jeez
– Unlock stuff!
– Like a useful tinfoil hat or a dead octopus on your head
– Don’t cake your pants
– Community-driven level editor gives endless replayability by letting you make and share levels, and compete in making the best (or worst) level
– Physics-based gameplay is 100% accurate in 90% of the time, (to be honest, we don’t really know how physics works)