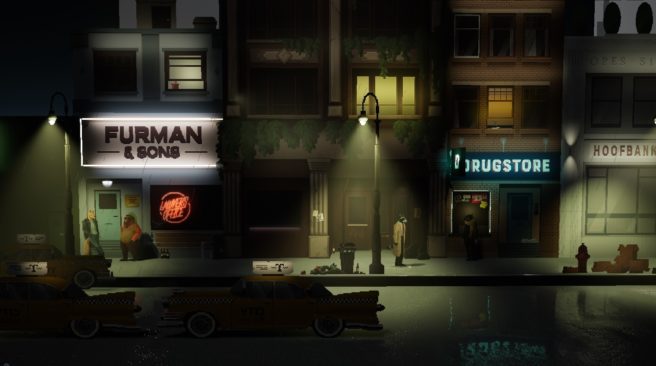 EggNut has been running a Kickstarter for Backbone, a pixel art cinematic adventure with stealth and action elements. With a little less than two days remaining in the campaign, another stretch goal was reached. We’ll officially be seeing Backbone on Switch as a result.

We have the following information and trailer for Backbone:

Backbone is a pixel art cinematic adventure with stealth and action elements. As a private investigator Howard Lotor you are set to solve detective cases, interrogate witnesses, explore the intriguing retrofuturistic Vancouver, and sneak your way to safety using smell-based stealth mechanics.

Backbone collides the visual and social contrasts of film noir with anthropomorphic animals and dystopian fiction. Crawl through the dark alleys of pixelated Vancouver, and experience the impactful storyline focused on themes of power and prejudice.

The heart of Backbone is world exploration, investigation and stealth. Become a detective: collect crucial pieces of evidence on the crime scene, interrogate witnesses, solve puzzles using in-game objects, and sneak around hostile enviornments using your sense of smell.

The planet is sprawling with anthropomorphic animal species. Streets of Vancouver are overgrown with ivy and humongous trees, branches and vines piercing through the concrete, and huge flowers nesting on top of the roofs.

The Great Apes call themselves the founding fathers of this world, and they are the moral, ethical and political compass of the society.

Vancouver is surrounded by huge walls from every side to make sure that no one from across it intrudes in the utopic society constructed so carefully by the Great Apes.

Howard Lotor is a raccoon private investigator. His mundane life is interrupted with the appearance of a powerful technology that can blur the lines of conventional order and change the society forever.

If you’d like to donate to the Backbone Kickstarter campaign, you can do so here. The project is targeted for release in 2019.