Bacon Man: An Adventure listed for September 29 release on Switch 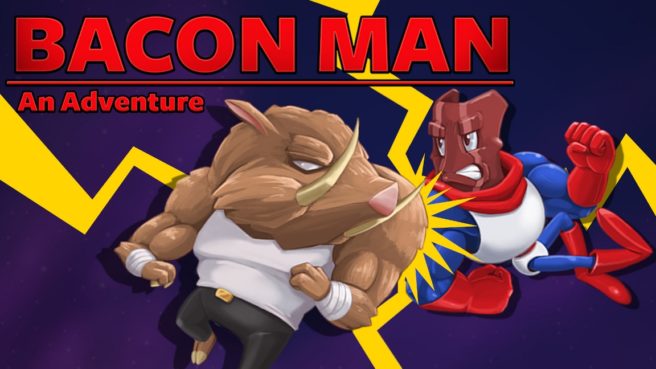 Bacon Man: An Adventure appears to have a final release date. As revealed by an eShop listing, the combat platformer is scheduled for September 29.

We have the following overview and trailer for Bacon Man: An Adventure:

Take on the role of Bacon Man, and battle through the food groups to confront those who’ve condemned him. Clear his name, and reclaim his rightful place on the Meat Throne.

– Tougher-than-nails platforming – in air, or on foot – using the patented “Bacon Control System™”.
– 2 Player Couch Co-Op: Crush 25 levels with a friend. Choose from 4 unique characters, each with their own special abilities.
– Obliterate enemies with versatile fighting moves like the Sky Divider, Smash, Stinger, Ground Pound… each one doubles as a method of mobility!
– Collect experience, level up, and gain incredible new abilities through the power of tutorials! Unlock classy costumes for a sassy new look.
– Play through a huge and satire-rich story …or straight up ignore the developers’ hard work by pressing the skip button.

Pricing for Bacon Man: An Adventure is set at $9.99 on the Switch eShop.