BAFL: Brakes Are For Losers releasing for Switch on April 19 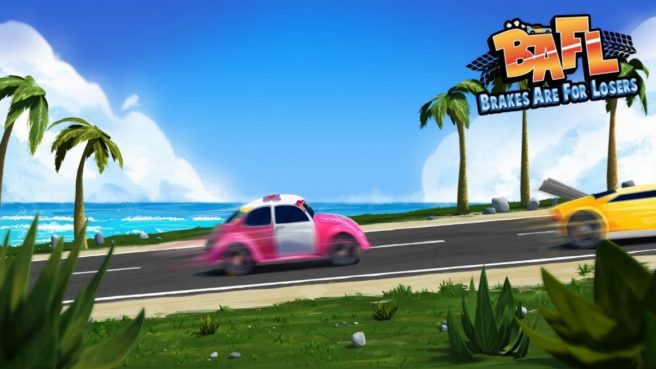 BAFL: Brakes Are For Losers was announced for Switch quite a long time ago. The racer now has a release date, as the eShop shows that it’s launching next month. You can pre-load the game in both North America and Europe.

BAFL: Brakes Are For Losers is slated for April 19. Pricing is set at $4.99. For more information and a trailer, continue on below.

Challenge your friends, pick a funky car and outrun them with your driving skills and dirty tricks. Ram them out of your way or pick up bonuses to wreck them.

Scooch together on the couch and gather up to 8 people playing on the same screen, compete in championships, upgrade your cars, and break friendships!

BAFL also offers a challenging solo experience with championships against fierce AIs and special modes such as Time Attack or Perfect Race.

Run in unique tracks inspired by the pop culture of the 80’s and 90’s along with funny details and surprising events. Each location takes you to a different setting, from peaceful Caribbean island to hellish underground, from fabulous Las Vegas all the way to the Moon!

BAFL is an invitation to dive in a state of the art old-school epic racing game. With no freaking brakes!

– Up to 8 player madness on the same screen.
– A Hardcore brakeless driving style.
– Solo and local multiplayer in challenging championships.
– Time Attack and Perfect Race also without brakes.
– Badass Soundtrack.
– No. Brakes.