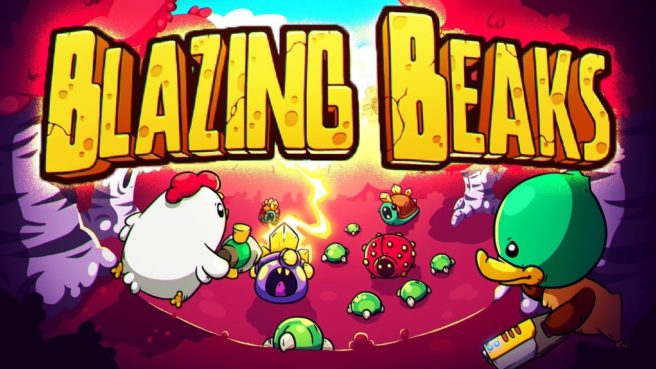 Applava is showing off Blazing Beaks at GDC this week, and has confirmed plans to make a Switch version. A specific release date was not yet announced.

Roguelite where too much greediness can lead to death. Colorful world with armed birds blazing the way out through the piles of mutants, monsters and creepy creatures. Lots of mysteries to unravel, secrets to find and levels to explore.
Artefacts:

You will be tempted to take them but it will make you suffer afterwards.

Plow your path through a bunch of enemies and whack them from where they came.

Arena based local multiplayer mode in which you can lose friendship.

In all this Story mode carnage it’s even more fun to play with a friend.

Unique abilities each character has will make gameplay even more versatile.

You can create your own, share and play with custom characters created by community.

Lots of hours of fun:

Story mode (1-2 local players): It’s an explosive adventure where you are fighting the invaders and searching for the origin of evil. Endless pile of enemies you can shoot, blast, zap and disintegrate every way you want. Cute and charming world with challenging levels full of surprises.

Tournament mode (2-4 local players): It’s battle experience where you compete with your friends to find out who’s the real hero.

Deathmatch: Everyone by themselves. Last beak standing wins.
One gun mode: Each player starts with the same randomly chosen weapon which cannot be changed in that round.
Drop Hearts mode: A player drops some hearts when he is hurt and either he or any other player can collect them.
Skull keeper mode: Grab and keep the golden skull without losing it for a certain amount of time and all your opponents will lose 1 HP.
Hunting mode: Each player starts with a spear in their possession. Once you throw it, you need to grab it before you can throw it again.