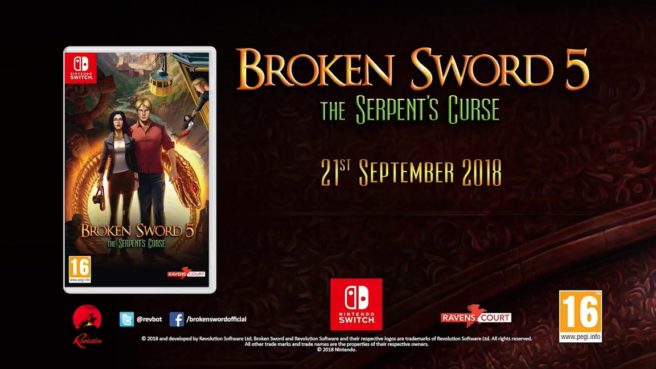 Broken Sword 5: the Serpent’s Curse is coming to Switch, ‬Revolution Software and Ravenscourt announced today. The adventure game will be coming to Nintendo’s console worldwide on September 21.

On Switch, Broken Sword 5 will include behind the scenes movies that can be unlocked as play progresses. These clips “reveal the story and the development process behind the game, through previously unreleased interviews with the Broken Sword team.” Joy-Con and touch screen play are both supported.

Here’s an introduction to Broken Sword 5, along with a trailer:

Paris in the spring. Shots ring out from a gallery…

A robbery… a murder… and the beginning of another epic, original Broken Sword adventure.

From multi-award winning Revolution Software comes the latest explosive episode in this classic series. Playing as intrepid American George Stobbart and sassy French journalist Nico Collard, you find yourself on the trail of a stolen painting – and a murderous conspiracy. A conspiracy whose roots lie in mysteries older than the written word…

Armed only with logic, integrity and a wry sense of humour – can George and Nico save mankind from disaster?

Can you solve the secret of the Serpent’s Curse? A curse forged by the Devil himself…