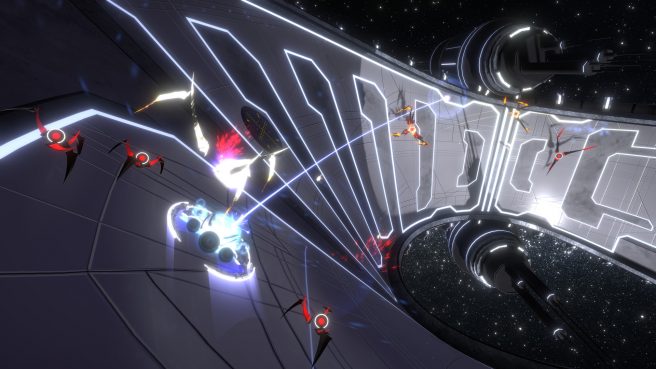 Maximum Games and Only by Midnight are moving the release date of their arcade-style twin-stick shooter Curved Space. Originally planned for June 18, the title will now arrive for Switch on July 13.

To recap, here’s an overview of Curved Space:

Curved Space is an intense arcade-style twin-stick shooter that takes the classic formula and plunges it into the weirdest reaches of space. Battle cosmic space-invading spiders across curved landscapes where bullets hug the terrain while the horizon drops sharply out of sight.

Inspired by arcade classics, players will have to hunt for weapon power-ups and upgrades while dodging enemy fire, blasting interdimensional bugs, and wrangling some enormous boss monsters. Simple to learn as you fight your way through the branching story-driven campaign, but tough to master as you chase the glory of the leaderboards.

– Old School Shoot ‘Em Up Reimagined – Enjoy the high-energy action of traditional 2D shoot ‘em ups in a warped 3D space. Climb walls, flip over to the other side of your environment, and experience breathtaking vistas.
– Play Your Style and Top the Leaderboards – Experience your space pilot’s harrowing journey in Campaign, take on new challenges, test your skills, and chase your place on the leaderboards in Daily Runs, Arena, Survival and Endless game modes.
– Ride the Synthwave – Get in the zone with a high-energy synthwave soundtrack in partnership with FiXT Neon, featuring artists like Scandroid, 3Force, and Fury Weekend.
– Upgrade and Take Them Down – Collect a plethora of ability and weapon upgrades. Weapons are varied (from lasers to flamethrowers to weed wackers!) and equipped with their own overdrive states!