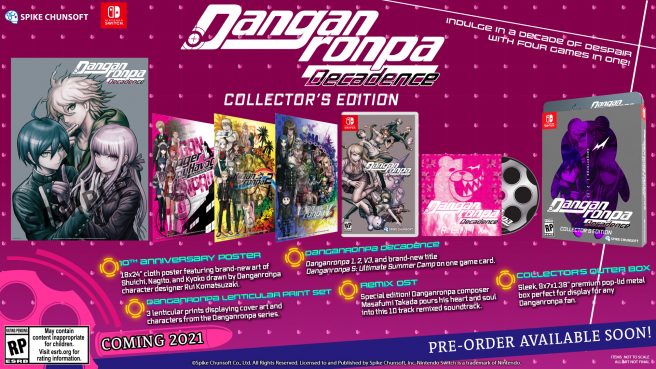 Spike Chunsoft has put out an official announcement for Danganronpa Decadence. Read the press release in full below.

In Danganronpa 1, 2, and V3, you and your classmates must participate in a killing game; the only way to survive is to correctly identify the killer during the Class Trial, and be the last one standing!
Each game comes with a gallery feature that allows you to view event illustrations, scenes, and listen to voiced dialogue!
Includes Danganronpa S: Ultimate Summer Camp, the 10th Anniversary title that’s an expanded version of the Ultimate Talent Development Plan bonus content from Danganronpa V3!
About Danganronpa S: Ultimate Summer Camp

With an all-star dream lineup of characters from each Danganronpa game, gather Hope Fragments at a tropical resort. Explore Jabberwock Island and develop your Dangan characters. Gather money through battle and upgrade your equipment, then defeat bosses and move on to the next island!

All four games will be available for individual purchase on Nintendo eShop!

Physical versions will be published in European regions by Numskull Games.